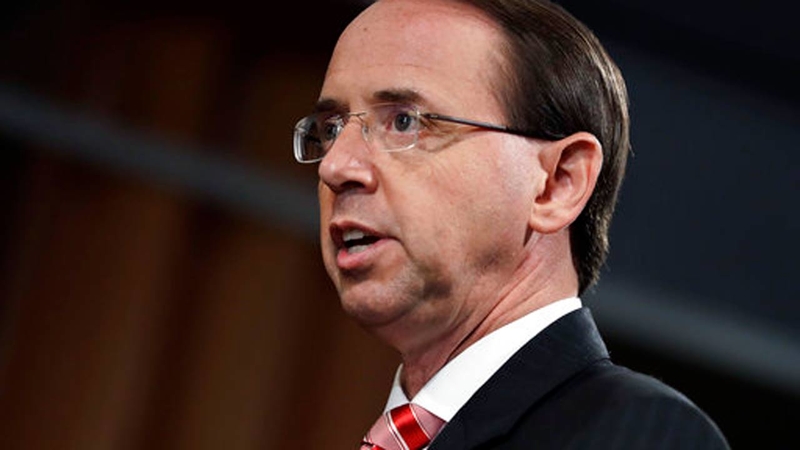 WASHINGTON, D.C. (WABC) -- A dozen Russian intelligence officers have been indicted for allegedly trying to interfere with 2016 election.

The indictments were announced Friday by Deputy Attorney General Rod Rosenstein as part of the ongoing special counsel probe into potential coordination between the Trump campaign and Russia.

The Russians are accused of hacking into the computer networks of the Democratic National Committee, the Democratic Congressional Campaign Committee and the presidential campaign of Hillary Clinton, and then releasing stolen emails on the internet in the months before the election.

"The internet allows foreign adversaries to attack Americans in new and unexpected ways," Rosenstein said. "Free and fair elections are hard-fought and contentious and there will always be adversaries who work to exacerbate domestic differences and try to confuse, divide and conquer us."

A Federal Grand jury in Washington, D.C. returned the indictment against the Russians.

"The unmistakable conclusion is that Bob Mueller wanted to show that this is not a debatable point," Christie said. "There is no debate that the Russians meddled in the election."

In just over a year since his appointment as special counsel, Robert Mueller and his hand-picked team of prosecutors have filed nine indictments covering twenty individuals and three businesses, earned five guilty pleas, have two criminal cases headed to trial, and sentenced one person to prison.
That includes four former Trump campaign and White House aides and 13 Russians accused of participating in a hidden but powerful social media campaign to sway American public opinion in the 2016 election.

In the first reaction from Trump's legal team, Giuliani calls the indictments "good news for all Americans," but falsely claims that "no Americans are involved."

The indictments Rod Rosenstein announced are good news for all Americans. The Russians are nailed. No Americans are involved. Time for Mueller to end this pursuit of the President and say President Trump is completely innocent.

While Rosenstein said the new indictment does not charge any Americans, he did not say no Americans were involved.

"There is no allegation in this indictment that Americans knew that they were corresponding with the Russians," Rosenstein said.

Putin's foreign affairs adviser, Yuri Ushakov, said earlier Friday that "the Russian state has never interfered and has no intention of interfering in the U.S. elections."

Ushakov spoke hours before the new charges were announced.