Trump criticizes Whitmer, says she should thank him: 'It was my Justice Department that arrested them'
WLS
By Chuck Goudie 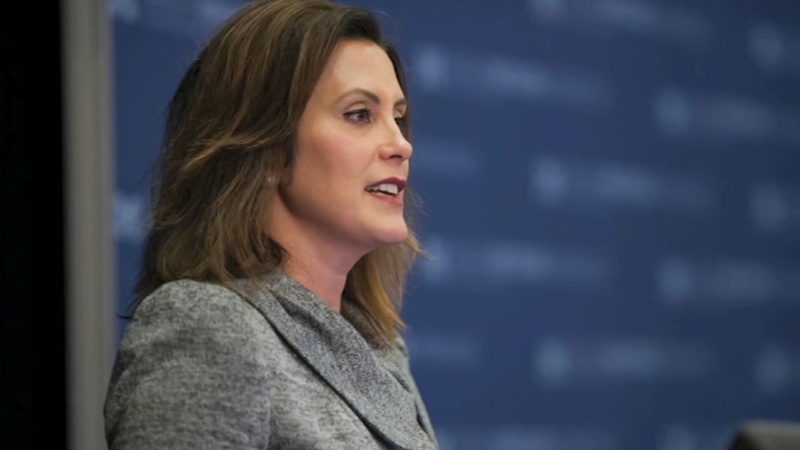 DETROIT -- Thirteen people were charged with plotting to kidnap Michigan Democratic Gov. Gretchen Whitmer at her vacation home in reaction to what they viewed as her "uncontrolled power," Michigan Attorney General Dana Nessel said.

Six people were charged in a federal investigation, and the Michigan attorney general charged seven.

The men plotted for months, consulting and training with militia members, and undertaking rehearsals in August and September, according to the complaint. Four of the men planned to meet Wednesday to "make a payment on explosives and exchange tactical gear," the FBI said in the court filing.

The men allegedly plotted to kidnap Gov. Gretchen Whitmer at her vacation home in reaction to what they viewed as her "uncontrolled power."

Newly released Michigan state court records include new details about the kidnapping terror plot, According to an affidavit filed with Thursday's state terrorism, gang and firearm charges, the Wolverine Watchmen met for "field training exercises" including firearms training "to prepare for the 'boogaloo,'" a "violent uprising against the government or impending politically-motivated civil war."

Authorities say two of the defendants charged Thursday, Joseph Morrison and Pete Musico, are "founding members of the Wolverine Watchmen" -- with Morrison considered the group's "Commander" who goes by the online moniker "Boogaloo Bunyan." According to the affidavit, the Wolverine Watchmen have asked members to target law enforcement officers at their homes, train for an attack on the Capitol of Michigan, and kidnap government officials-- including Governor Whitmer.

The FBI quoted one of the accused as saying Whitmer "has no checks and balances at all. She has uncontrolled power right now. All good things must come to an end."

The government used informants and undercover agents to thwart the alleged plot. Federal search warrants were put out in about a dozen cities across Michigan in the process. All suspects were arrested Wednesday night without incident and each faces up to life in prison.

Andrew B. Birge, the United States Attorney for the Western District of Michigan, discusses the arrest of six men accused of plotting to kidnap Michigan Democratic Gov. Gretchen Whitmer at her vacation home.

"All of us in Michigan can disagree about politics, but those disagreements should never, ever amount to violence. Violence has been prevented today," Detroit U.S. Attorney Matthew Schneider told reporters.

The criminal complaint said the plan involved Whitmer and her second home in Elk Rapids, or northwestern Michigan. The home was reportedly under surveillance for a bombing plot.

FBI officials said the plot also included blowing up bridges to stop police, and once the governor was kidnapped to take her to Wisconsin to put her on trial and possibly execute her.

The ABC7 Chicago I-Team located the Instagram account belonging to suspect Brandon Caserta, on which he posts anti-government memes and video messages in which he says things like, "The price of freedom is eternal vigilance. And indifference to this notion is the way the people can and will secure their own oppression."

Whitmer has been praised but also deeply criticized for the state's response to the coronavirus. She put major restrictions on personal movement throughout the state and on the economy, although many of those limits have been lifted. She called those decisions "gut-wrenching."

The criminal complaint did not mention those orders.

Through electronic communications, two of the alleged conspirators "agreed to unite others in their cause and take violent action against multiple state governments that they believe are violating the U.S. Constitution," the FBI said. They communicated via encrypted messages.

Fox said he needed 200 men to storm the Capitol building in Lansing and take hostages, including the governor, according to the FBI.

He said he wanted to try Whitmer for "treason" and would execute the plan before the Nov. 3 election, the government said.

What to know about Michigan Gov. Gretchen Whitmer.

Later, however, the group shifted to targeting the governor's vacation home, the FBI said.

The government said the scheme appeared to have roots in a June gathering in Dublin, Ohio, attended by more than a dozen people from several states, including Croft and Fox.

"The group talked about creating a society that followed the U.S. Bill of Rights and where they could be self-sufficient," the FBI affidavit said. "They discussed different ways of achieving this goal from peaceful endeavors to violent actions. ... Several members talked about murdering 'tyrants' or 'taking' a sitting governor."

In a televised statement later Thursday, Whitmer said she never could have imagined being the target of a kidnap and murder plot, engineered by "sick and depraved men," whom she hopes will be brought to justice.

Michigan Gov. Gretchen Whitmer holds a news conference on Oct. 8 after agents foiled a plot to kidnap her, announcing charges in an alleged scheme that involved months of planning and even rehearsals to snatch Whitmer at her vacation home.

She said President Donald Trump gave "comfort" to those who stoke hatred, like the alleged militiamen charged in the hostage and death plot against her.

"Hatred, bigotry and violence have no place in the state of Michigan; we will find you, we will hold you accountable and we will bring you to justice," Whitmer said.

Then Whitmer invoked the name of another Republican president, Ronald Reagan, praising his hardline comments 40 years ago against violent race baiters.

"You don't have to agree with me, but never forget that we are all in this together," she said. "Show a little kindness and a lot more empathy."

She took no questions.

On Fox News Thursday night, President Donald Trump criticized Whitmer and said she should be thanking him.

The suspects are due in court soon.

This plot resembles similar attempted by previous Michigan militia groups, and Illinois militia organizations, in that the goal is to trigger a civil war by targeting law enforcement and government officials, as reported during the past decade by the ABC7 I-Team.

It was shut down in 2010, but all the federal cases fell apart.