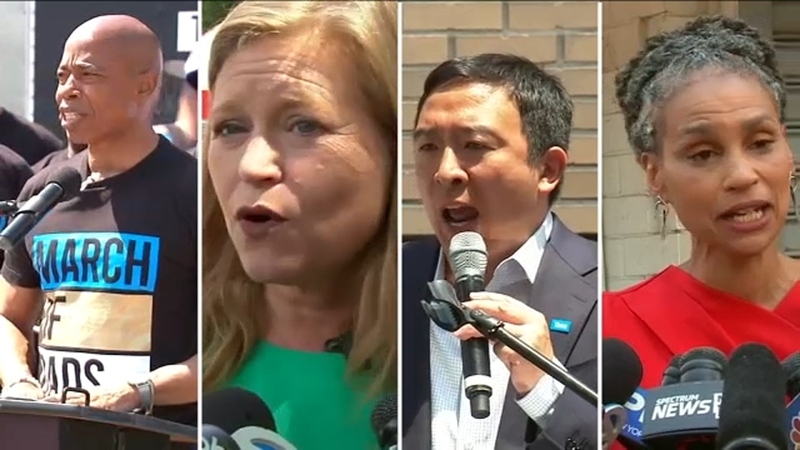 As early primary voting ends, candidates for NYC mayor pull out all stops

According to the Board of Elections, 191,197 votes have been cast after nine days of early voting.

From the Upper West Side to Chinatown and Brooklyn, the mayoral hopefuls were all trying to woo people who, for the first time, are facing ranked choice voting.

A day after Yangencouragedvoters to make Garcia their number two choice during a joint rally,the two were together again on the campaign trail Sunday.

"We're campaigning together to send a message that people should get out and vote, make voices be heard and rank choice voting enables people to express their preference in more than one candidate. We should take advantage of that," Yang said.

But when asked if she would campaign alongside Wiley, Garcia said it just hasn't come up.

"I'm always open to having a conversation, but time is getting tight and I'm looking to win this and close it out in these final days," Garcia said.

Frontrunner Eric Adams feels the move is an attempt by the pair to derail his bid for mayor and weaken minority voters' voices.

"I think it's a last-minute move out of desperation, let them do what they do. We have two more days to go. I'm excited from what I'm seeing in the street," Adams said.

Wiley appeared at the same rally as Yang and Garcia, but chose not to share the stage.

"All I'm doing is making sure everyone knows and can make a fully informed decision and ask them to rank me number one," Wiley said.

As for the issues, voters are pretty consistent.

"The crime and safety and keeping businesses and the tax base in the city is important as well as the homeless problem," voter Virginia Sobol said.

Tuesday may be the official primary election day, however, counting the votes and determining a winner could take the Board of Elections two weeks or more.