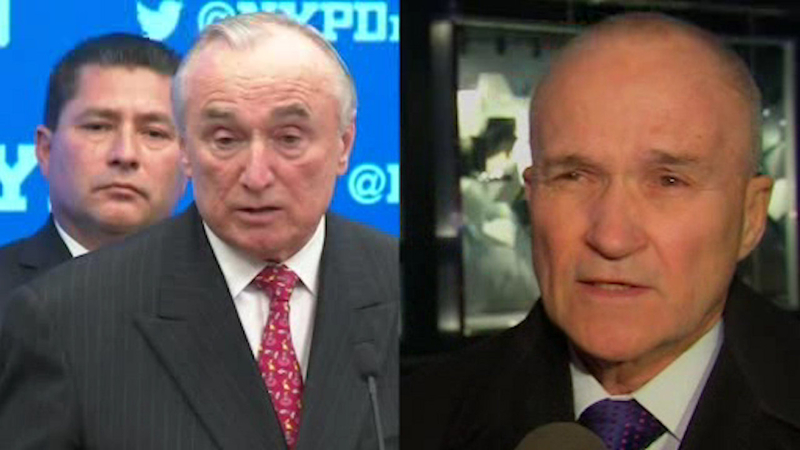 Kelly claims the department has re-classified some violent crime to make the city appear safer, but Bratton insists there has been no change to the way the city records shootings since Kelly held the job.

It's understandable why Kelly and Bratton really don't care for each other. Bratton was commissioner under Rudy Giuliani, then Kelly under Michael Bloomberg, now Bratton again with Mayor Bill de Blasio. And each one wants to lay claim to being the best crime fighter in the country.

But Eyewitness News is told the two men despise each other, and now, there could be a new reason for the tension. Could Kelly, perhaps, want to run for mayor in 2017?

A day after their bitter feud exploded, Bratton was still ripping Kelly over claims that the department is fudging figures that claim crime hast hit at an all-time low in New York City.

"We categorically refute everything Commissioner Kelly alleged," Bratton said Wednesday. "We are able to rebut every one of his assertions."

Police figures show shootings are down this year by about 3 percent, but murders are up slightly from a historic low last year.

On Tuesday, Bratton unleashed his attack.

"For him to denigrate that hard work that has resulted in shootings being reduced significantly in this city and claim in some fashion that we are playing with the numbers, shame on him," he said. "Let him back up that allegation."

But Kelly didn't back down, saying he is "troubled by the eroding quality of life in the city" in a new statement. He also got specific, claiming the department has reclassified things like graze wounds, no longer counting them and similar cases as shooting incidents.

"There appears to be an effort to reduce the number of reported shootings," he said. "Even though when we see a 20 percent increase in murder by guns certainly in 2015."

Under Bratton and de Blasio's watch, the practice of stop and frisk targeting mostly young men of color has dropped dramatically.

Many predicted that changing Kelly's policies would skyrocket crime, but stop and frisk reports are down 96 percent, and major crime has actually dropped 2 percent.

"Yeah, we can have it both ways," the NYCLU's Donna Lieberman said. "We can live with low crime in a safe city, and have a police force that does not engage in stop and frisk that violates people's rights."

So what's the reason for this Bratton/Kelly feud if not because of how Bratton changed stop and frisk? Bratton first suggested that maybe Kelly is just trying to sell his new book, but now, he is also suggesting that Kelly wants to run against his current boss.

"Mr. Kelly is selling a book, the New York Post is reporting he is thinking of running for mayor," Bratton said. "I stand by my crime statistics, because they are factual. They are the truth."

There has been plenty of speculation about whether Kelly might run for mayor, but he is 74 and has often said he's not interested.

A Kelly campaign would make sense if quality-of-life issues such as crime, graffiti and homelessness were out of control, like they were during the Dinkins years. But it is not like that now, and sources say a Kelly run doesn't seem to make sense yet.

He and his office did not respond to our calls for a comment.

Here is the full statement by Ray Kelly, followed by the detailed response from the NYPD.

"First, let me say, like all New Yorkers, I am troubled by the eroding qualify of the life in the city that is obvious to anyone who lives here. Most disturbing is a 20 percent increase in homicides by gun, accompanied by claims that overall shootings are down. Members of the New York City Police Department have informed me that the current administration has changed the way shootings victims are calculated. For example, victim who incurs a graze wound are often not counted as a shooting victim, as was done previously. Similarly, a victim who sustains wounds by flying glass caused by a shooting is not recorded as a shooting victim. Further, wounds sustained by a victim who refuses to cooperate with a police investigation have been recorded as self-inflicted. All in an effort to reduce the reported number of shootings. In homicide, the category of "circumstances undetermined pending investigation" has been misapplied to manipulate murder totals. This information, supplied by active members of the department themselves, in no way denigrates the hard work of our police officers. Rather, it reveals an administration willing to distort the reality of what they face on the street."

Late Tuesday night, the NYPD released a "fact check" on the statement made by Ray Kelly, detailing five points:

The statements made by Raymond Kelly are unsupported by fact and the conclusions drawn are misleading to the public.

1. As of December 28, New York City has seen an increase of 15 Homicides. Of that, homicides by gunfire are up by 22 percent as of today which is a raw number of 40, however, homicides by stabbing are down by 40 percent for a raw number of 33. These are the normal ebbs and flows of crime trends in what is a period of historically low numbers. This is achieved at a time when other major American cities are seeing surges in violent crime. New York City is not.

2. There has been no change in the way shooting incidents are calculated. Graze wounds (that draw any blood) are counted as shooting victims just as they always have been.

3. A victim who sustains wounds by flying glass caused by gunfire is not recorded as a shooting incident. It has never been counted as one. The injury must be from the bullet. That is the same policy that existed under Mr. Kelly.

4. Self-inflicted gunshot wounds: About one-third of gunshot victims refuse to cooperate with police. The reasons can range from fear of reprisal to concealing their own criminal activity. This is nothing new. Not cooperating with police does not equate to a determination that a wound is self-inflicted and it never has. Only when additional evidence is developed in a shooting investigation such as witness statements, video, Shotspotter, physical evidence, would the shooting incident be deemed self-inflicted. In one such incident on Christmas Day, in Brooklyn's 71st Pct., detectives investigated a shooting with an uncooperative victim. A subsequent investigation revealed security camera video of the victim shooting himself accidentally. Up until that moment, the case was carried on the books as a shooting incident.

5. No change in how we record shooting numbers: NYPD crime reporting manuals on the Department's Intranet dating back to at least April of 2012 detail what does NOT count as a shooting, listed are the following: