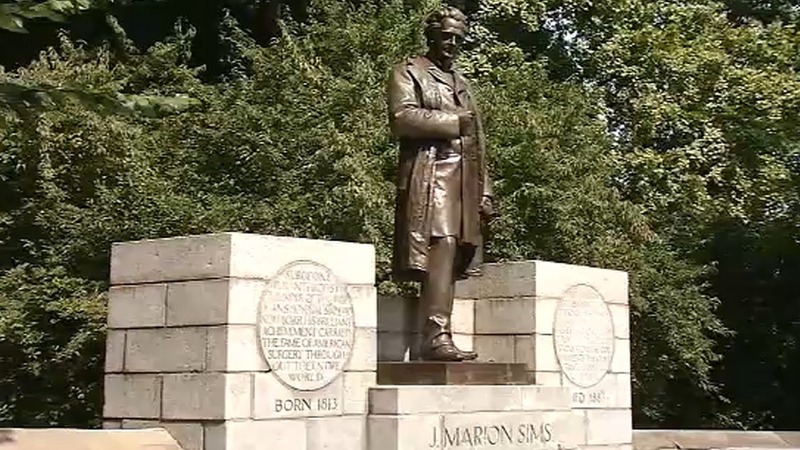 EAST HARLEM, Manhattan (WABC) -- A tribute to a 19th-century doctor is under fire.

Sims invented techniques to treat debilitating childbirth injuries, but he tested his methods on female slaves in the 1840's, when anesthesia use was rare.

Even city leaders have now joined the call for its removal.

Dr. James Marion Sims is often referred to as the father of modern gynecology.

Some defend his record of work within the context of his time, but others, including City Council Speaker Melissa Mark-Viverito, call what he did repugnant and reprehensible.

"Under the guise of medical advancement they were poked, prodded, tortured and dehumanized," Mark-Viverito said.

Between the years of 1845-1849 Sims conducted experiments on enslaved black women without anesthesia, which at the time was new to the medical profession.

His work did lead to breakthroughs in treating a very specific condition linked to difficult childbirth.

For roughly seven years, leaders here in east Harlem have asked the city to remove the statue which sits on the edge of Central Park at 5th Avenue and 103rd Street.

Now their push is gaining more steam as similar monuments and plaques all of the country are being taken down.

"So he wasn't a confederate soldier, but by his own deeds, recorded in his own words, he was just as offensive as those confederate monuments being removed in other states," Collier said.

The city is in the process of conducting a 90-day review of all symbols of hate on city property and Monday, Mayor de Blasio confirmed this monument will get "very immediate attention."

"It reminds us of how much work needs to be done in this city with regards to memories that are made into statues that are frankly an insult," said Bill Perkins, New York City Council.
Report a correction or typo
Related topics:
politicseast harlemnew york citynew york city councilstatueslavery
Copyright © 2021 WABC-TV. All Rights Reserved.
TOP STORIES
Police release new information on suspect wanted in brazen shooting; kids seen running for cover
Man accused of threatening people with taser in Washington Square Park
Juneteenth marked with celebrations across NYC, Tri-State
George Floyd statue unveiled in Brooklyn
AccuWeather: Hot, humid but nice for dad
Will NYC, Tri-State area be impacted by Tropical Storm Claudette?
Wife of man killed by Honolulu police: 'If it was me, I'd still be alive'
Show More
Buyers lining up to check out 'house from hell' listed for nearly $600K
Biden family dog Champ dies
Candidates make final pushes ahead of NYC mayoral primary
What to know about voting in NYC's mayoral primary
NYC elections: What is ranked choice voting?
More TOP STORIES News