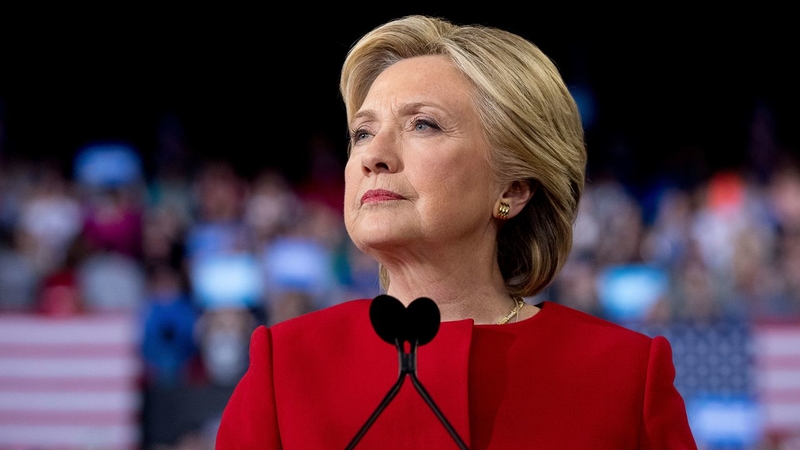 MIDTOWN, Manhattan (WABC) -- Hillary Clinton thanked her supporters Wednesday and urged them to continue to work toward the campaign's goals and to accept Republican President-elect Donald Trump, despite a devastating loss to him Tuesday.

She said they owe Trump an "open mind" and a "chance to lead," and that American democracy depends on a "peaceful transition of power."

Speaking to supporters Wednesday at the New Yorker Hotel in Midtown, Clinton said the campaign has been "one of the greatest honors" of her life. She said the effort was not about her, but "the country we love."

Clinton acknowledged that America has not "shattered that highest and hardest ceiling" with her failed bid for the White House. But she said, "someday, somebody will."
EMBED More News Videos

The defeated Democratic candidate directed comments to the "little girls who are watching." She said, "you are valuable and powerful and deserving" of every opportunity in the world.

She urged them to strive to pursue their dreams, whatever they may be.

Clinton took the stage to sustained applause. Ashen-faced aides sat in the front row as supporters in the audience sobbed at the emotional event.

"I'm sorry we did not win this election," she said. Standing before the crowd, she said, "This is painful and it will be for a long time."

Clinton said America "is more deeply divided than we thought," but she is urging her supporters to accept the outcome of the presidential election. "I still believe in America, and I always will."

She noted that "our responsibility as citizens is to keep doing our part to keep building that better, stronger, fairer America."

Clinton emphasized the need to continue pursuing the campaign's goals. "Let's do all we can to keep advancing the causes and values we all hold dear," she said.

She was introduced by vice presidential candidate Tim Kaine who talked about her ability to make history and her loyalty. "I'm proud of Hillary because she loves this country."

"Nobody, nobody, had to wonder about Hillary Clinton whether she would accept an outcome of an election in our beautiful democracy. Nobody had to ask that question," said Kaine.

Clinton thanked President Obama and first lady Michelle Obama for their leadership, as well as Kaine and his wife, Anne Holton.

She also thanked her family, including former president Bill Clinton and her daughter, Chelsea, as well as team members at the headquarters in Brooklyn.

"So, my friends, let us have faith in each other. Let us not grow weary.Let us not lose heart, for there are more seasons to come, and there is more work to do," said Clinton before leaving the stage.

Clinton did not give a formal concession speech Tuesday night. But she did call Trump early Wednesday to congratulate him on his victory in Tuesday's election.