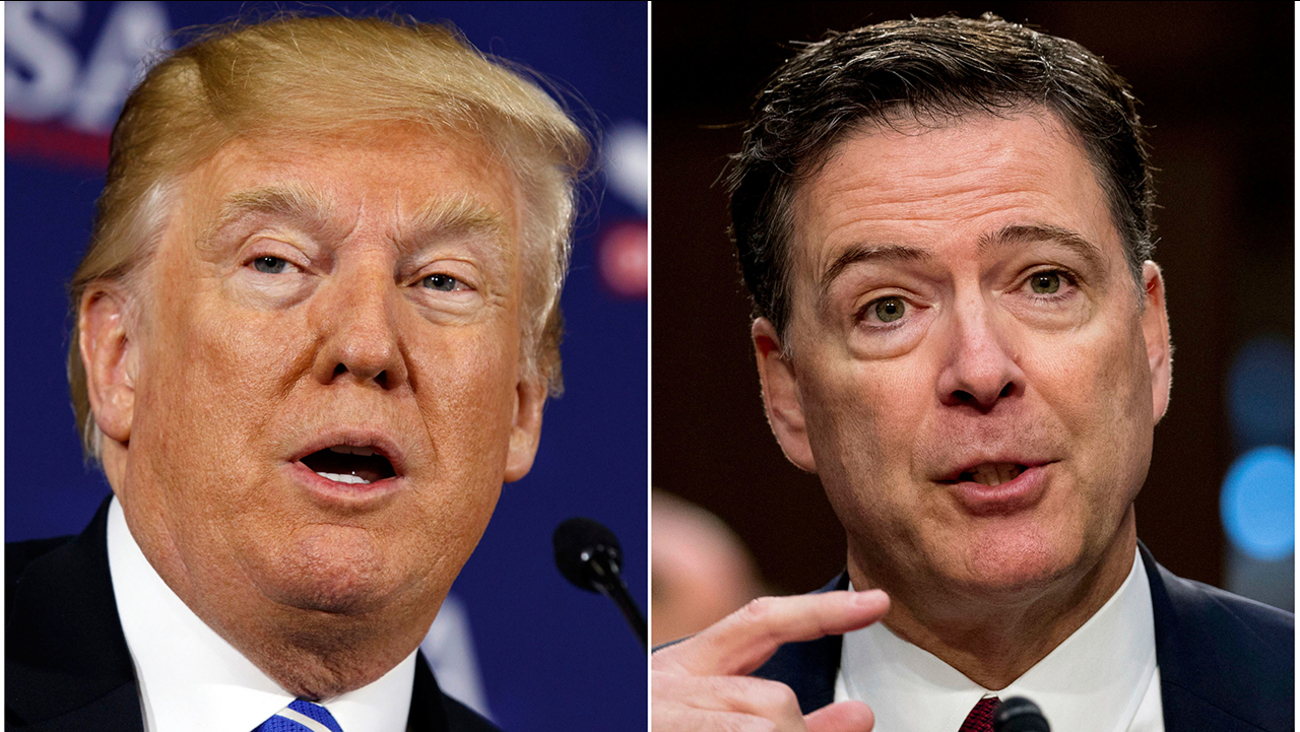 AP
WASHINGTON -- President Donald Trump told former FBI Director James Comey that he had serious concerns about the judgment of his first national security adviser, Michael Flynn, and his chief of staff asked days later if Flynn's communications were being monitored under a secret surveillance warrant, according to memos maintained by Comey and obtained by The Associated Press.

The 15 pages of documents contain new details about a series of interactions with Trump that Comey found so unnerving that he documented them in writing. Those encounters in the weeks before Comey's May 2017 firing include a Trump Tower discussion involving allegations of prostitutes and Russia, a White House dinner at which Comey says Trump asked him for his loyalty and a private Oval Office discussion where the ex-FBI head says the president asked him to end an investigation into Flynn.

The documents had been eagerly anticipated since their existence was first revealed last year, especially since Comey's interactions with Trump are part of special counsel Robert Mueller's investigation into whether the president sought to obstruct justice. The memos have been turned over to Mueller.

Comey has said publicly that, "I knew there might come a day when I would need a record of what had happened, not just to defend myself, but to defend the FBI and our integrity as an institution and the independence of our investigative function."

According to one memo, Trump complained about Flynn at a private January 2017 dinner with Comey, saying "the guy has serious judgment issues." He then blamed Flynn for a delay in returning the congratulatory call of an international leader, telling Comey he would be upset if he had to wait six days for a returned phone call.

"I did not comment at any point during this topic and there was no mention or acknowledgment of any FBI interest in or contact with General Flynn," Comey wrote.

At that point, the FBI had already interviewed Flynn about his contacts with the Russian ambassador, Sergey Kislyak, and the Justice Department had already warned White House officials that they were concerned Flynn was vulnerable to blackmail.

Flynn was fired February 13, 2017, after White House officials said he had misled them about his Russian contacts during the transition period. In a separate memo, Comey says Trump cleared the Oval Office of other officials, encouraged him to let the investigation into Flynn go and called him a good guy.

The memos reveal that days before Flynn's firing, then-White House chief of staff Reince Priebus asked Comey if Flynn's communications were being monitored under a secret surveillance warrant.

"Do you have a FISA order on Mike Flynn?" Priebus asked Comey, according to the memos, referring to an order under the Foreign Intelligence Surveillance Act.

Comey said he "paused for a few seconds and then said that I would answer here, but that this illustrated the kind of question that had been asked and answered through established channels."

Comey's response is redacted on the unclassified memos.

The memos were provided to Congress earlier Thursday as House Republicans escalated criticism of the Justice Department, threatening to subpoena the documents and questioning officials. In a letter sent to three Republican House committee chairmen Thursday evening, Assistant Attorney General Stephen Boyd wrote that the department was sending a classified version of the memos and an unclassified version. The department released Boyd's letter publicly but did not release the memos.

Justice officials had allowed some lawmakers to view the memos but had never provided copies to Congress. Boyd wrote that the department had also provided the memos to several Senate committees.

Comey is on a publicity tour to promote his new book, "A Higher Loyalty." He revealed last year that he had written the memos after conversations with Trump.

Boyd wrote in the letter that the department "consulted the relevant parties" and concluded that releasing the memos would not adversely affect any ongoing investigations. Special counsel Robert Mueller is investigating potential ties between Russia and Trump's 2016 campaign as well as possible obstruction of justice by the president.

Boyd said the decision to allow the release of the memos "does not alter the department's traditional obligation to protect from public disclosure witness statements and other documents obtained during an ongoing investigation."

Comey said in an interview Thursday with CNN that he's "fine" with the Justice Department turning his memos over to Congress.

"I think what folks will see if they get to see the memos is I've been consistent since the very beginning, right after my encounters with President Trump, and I'm consistent in the book and tried to be transparent in the book as well," he said.

Last week, the GOP chairmen of three House committees demanded the memos by Monday. The Justice Department asked for more time, and the lawmakers agreed.