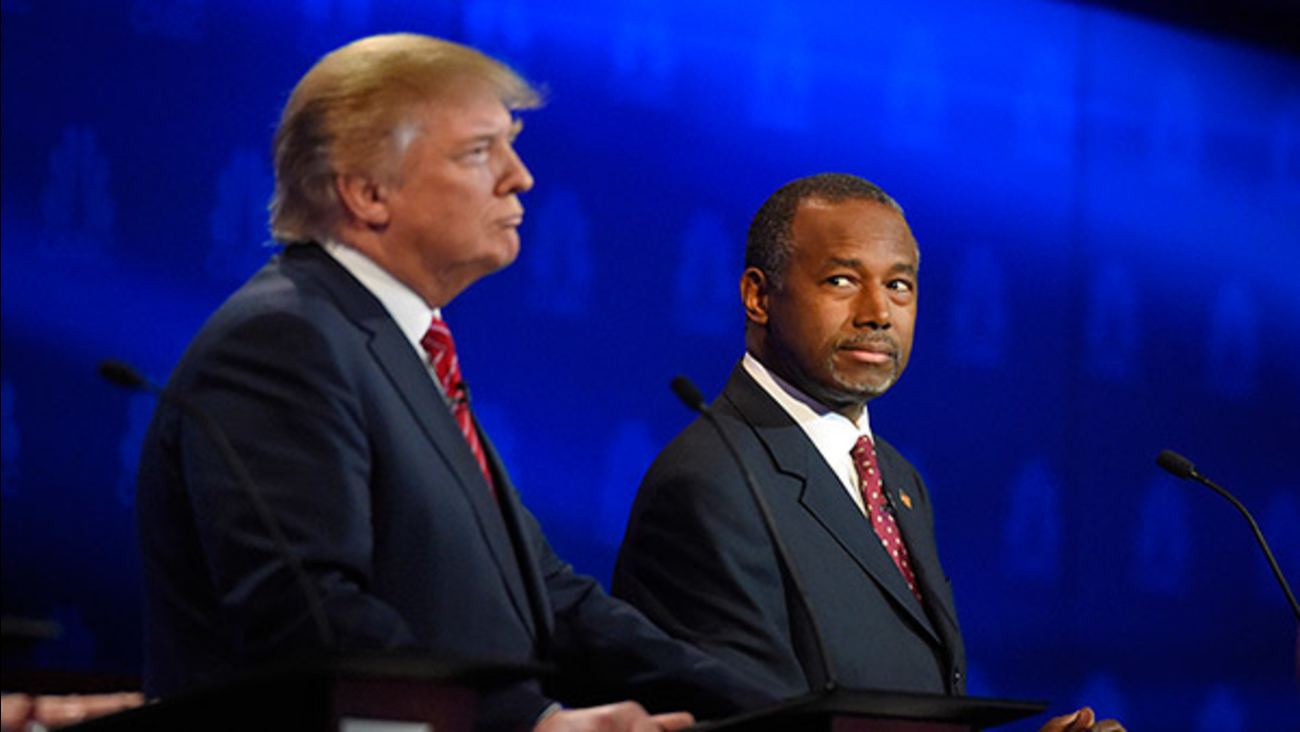 FORT DODGE, Iowa -- Republican presidential candidate Donald Trump, brushing aside any recent claims of civility, has equated Ben Carson's childhood "pathological temper" to the illness of a child molester, questioned his religious awakening and berated voters who support him.

In his free-wheeling appearance, Trump also said Florida Sen. Marco Rubio, who is rising in the polls, was "weak like a baby, like a baby" and "not a good poker player because every time he's under pressure he starts to just profusely sweat." And he said former Florida Gov. Jeb Bush didn't deserve his attention because his campaign is doing so poorly.

Trump accused Democratic front-runner Hilary Rodham Clinton, who is campaigning to be the first female president, of "playing the woman's card, big league."

But his strongest words, by far, were aimed at Carson, whose powerful life story and soft-spoken demeanor have captured the attention of many voters. Trump, once the undisputed poll leader, is now running neck-and-neck with Carson in many opinion surveys.

Trump previewed his attack line in an interview with CNN Thursday in which the businessman pointed to Carson's own descriptions of his "pathological temper" as a young man.

In his book "Gifted Hands," Carson described the uncontrollable anger he felt at times while growing up in inner-city Detroit. He wrote that on one occasion he nearly punched his mother and on another he attempted to stab a friend with a knife.

"I had what I only can label a pathological temper - a disease - and this sickness controlled me, making me totally irrational," Carson said, in describing the incident with his mother. He referred to "pathological anger" again in telling about lunging at his friend, a knife blade breaking off when it hit the boy's belt buckle.

Carson's ability to overcome his anger as well as an impoverished childhood to become a world-renowned neurosurgeon has been a central chapter in his personal story. A spokesman for Carson declined to comment on Trump's remarks.

During the rally Thursday night in Fort Dodge, Iowa, Trump said that Carson is "an enigma to me."

He went on to repeat the molestation analogy with his comments about pathological temper, and he questioned aspects of Carson's biography. At one point, Trump acted out the scene of Carson trying to stab his friend, lurching forward dramatically. "He lunged that knife into the stomach of his friend, but, lo and behold, it hit the belt!" Trump declared.

In "Gifted Hands," Carson describes racing to the bathroom in his house after the near-stabbing incident - and in time beginning to pray for God's help in dealing with his temper.

"During those hours alone in the bathroom, something happened to me," he wrote. "God heard my deep cries of anguish. A feeling of lightness flowed over me, and I knew a change of heart had taken place. I felt different. I was different."

In questioning Carson's religious awakening, Trump said in Fort Dodge that Carson went into the bathroom and came out, "and now he's religious."