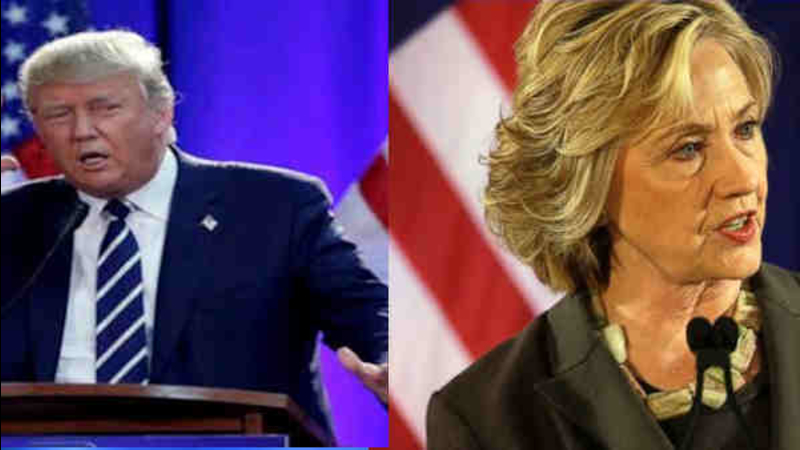 WASHINGTON (WABC) -- Donald Trump took to Twitter to insist that the sexist term he used to describe Hillary Clinton's last election loss is a commonly-used term in politics, and he's now blaming the mainstream media for mischaracterizing the term.

For those on TV defending my use of the word "schlonged," bc #MSM is giving it false meaning-tell them it means beaten badly. Dishonest #MSM

Meanwhile, a new poll shows Trump's lead in the Republican primary has grown despite some criticism for his controversial comments, and that has led to uneasiness on the Democratic side.

Months of intense focus on the Republican race have reverberated through the field, prompting Clinton to turn her attention to her would-be GOP challengers and leaving her chief rival, Vermont Sen. Bernie Sanders, gasping for airtime.

Now, after spending weeks largely out of the spotlight nationally, Clinton plans to intensify her campaign schedule from an almost incumbent-style public effort to a more aggressive approach.

With just six weeks left before the first round of primary voting, Clinton plans a series of multi-day swings through Iowa starting in January, interspersing trips there with stops in New Hampshire and other early primary states. Her campaign will also unveil what Clinton has called her "not-so-secret weapon," sending her husband, former President Bill Clinton, out to hit the stump after months of behind-the-scenes activity, wooing donors in private events.

And in a sign of the escalating battle between the two party front-runners, her campaign was forced to engage with Trump on Tuesday after he called her bathroom break during the recent debate "disgusting" and said she was "schlonged" in the 2008 race.

In an interview Tuesday with The Des Moines Register, Clinton said: "I don't know that he has any boundaries at all. His bigotry, his bluster, his bullying have become his campaign."

Though Clinton leads Sanders in national polls by more than 20 points, the numbers are much tighter in Iowa and New Hampshire, where Sanders has an edge. The Sanders campaign believes victories in those two states would undercut Clinton's strength and send him into the next contests - in Southern and Western states where he's polling lower- with a boost of momentum.

"You will take that momentum coming out of the states, people will come to you in very large numbers, in very short order, and you will build that into victory," Sanders campaign adviser Tad Devine told reporters in New Hampshire on Saturday. "That has been our plan from day one."

But Sanders struggled to find his footing as the race has shifted away from his core economic message to one of national security after attacks by extremist elements in Paris and San Bernardino, California.

Clinton aides say they are taking nothing for granted in the upcoming contests. "We are totally focused on this primary right now," said campaign manager Robby Mook.

In recent weeks, however, Clinton has spent far more time attacking Trump and her would-be Republican rivals than Sanders, demonstrating a growing confidence in her primary standing and increased focus on the general election.

Democratic leaders believe that reminding their voters of whom they may be up against in November helps motivate their party in a primary that hasn't generated the excitement of the Republican field.

"I want him to talk every single day," Democratic National Committee chairwoman Debbie Wasserman Schultz said of Trump. "It's going to help propel our nominee to the White House."

For Clinton, going after Trump creates an opportunity to reenter a political conversation that has largely moved away from the Democratic side and strike back at her GOP opponents, who are getting plenty of airtime to lob attacks not only at each other but Clinton.

But even as Clinton and her party publicly slam Trump, they're quietly grappling with the question of how to target the GOP front-runner without discounting the feeling of insecurity he's tapped into in the electorate.

Between attacks on what she calls his bigoted rhetoric and proposal to ban Muslims from entering the U.S., Clinton has also begun telling voters that "it's OK to be afraid."

The lack of attention on the Democratic race has given Clinton a break from the intense scrutiny of the summer, when much of the political conversation was focused on her use of a private email server as secretary of state and the foreign financial ties of the Clinton Foundation, the non-profit started by her husband.

Her campaign has been able to use the lull to build up its operation, organize key states, promote celebrity endorsements and roll out foreign policy initiatives and positions on infrastructure, manufacturing and taxes. She's done a number of interviews on late night and afternoon talk shows designed to show her softer side, including a well-received cameo on "Saturday Night Live."

"We're the sideshow," said Paul Maslin, a Democratic pollster unaffiliated with either campaign. "This is the opportunity to start to lay the groundwork for a general election message."