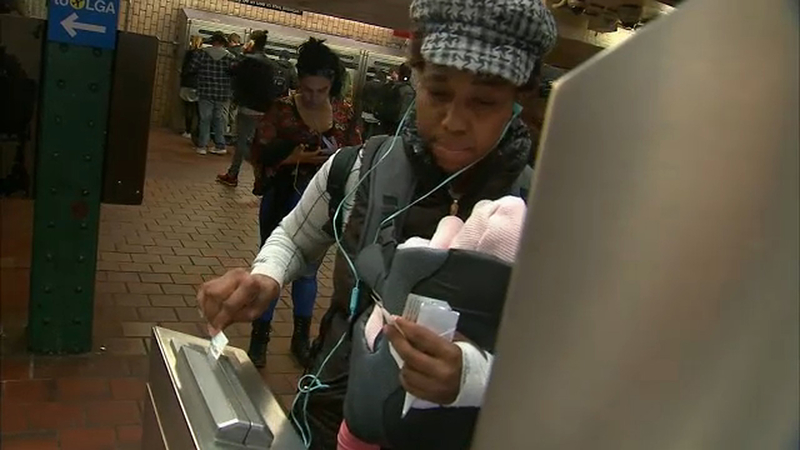 HARLEM, Manhattan (WABC) -- Subway advocates on Monday launched the "Call the Mayor" campaign as they seek to persuade Mayor Bill de Blasio to spend $212 million on discounted subway and bus rides for the poor.

They plan to call the mayor and demand his support.

Meeting at the West 125th Street stop, activists and riders spoke in favor of "Fair Fares," the name for the plan.

"(De Blasio) wants to make New York City the fairest big city in America," said Rebecca Bailin, of Rider's Alliance. "What better way to do that than with Fair Fares?"

The proposal would offer half-priced MetroCards to about 800,000 New Yorkers living below the federal poverty level, about $25,000 for a family of four.
After the announcement, organizers of the campaign passed their cell phones to subway riders who called the mayor's office, often speaking to a recording or 311 operators.

"The plan means we would be able to save more, save more to get out of the circumstances we're in," said Nikia Thomas, a subway rider from Harlem.

The mayor, who has campaigned as a liberal Democrat, has stubbornly refused to support the plan, instead focusing on the NYC Ferry system. The City Council, though, has made the proposal its top priority in budget negotiations, with Council Speaker Corey Johnson as a major advocate of the plan.

"If you can't get on the subway and you're begging for a swipe every morning to get to work, you can't really be a full citizen in New York City," Johnson said.

Many area residents support the plan.

"It would mean more food in my house to feed my children," said Crystal Johnson, of Harlem.
The mayor says he is not against the idea of discounted subway and bus fares, he just doesn't want to pay for it in his budget. He prefers a millionaire's tax to pay for "Fair Fares," but it's doubtful that proposal will pass given the current political climate in Albany. Currently, Republicans effectively control the state Senate, and they've been reluctant to support a new tax on the rich.

The proposal is part of heated budget negotiations at City Hall.

"I don't know about nasty, but I think people are feeling a little more independent and members have a bit of a fighting spirit," Johnson said.

The city's budget must be finalized by July 1.