Sean Hannity blasted for not disclosing relationship with Michael Cohen 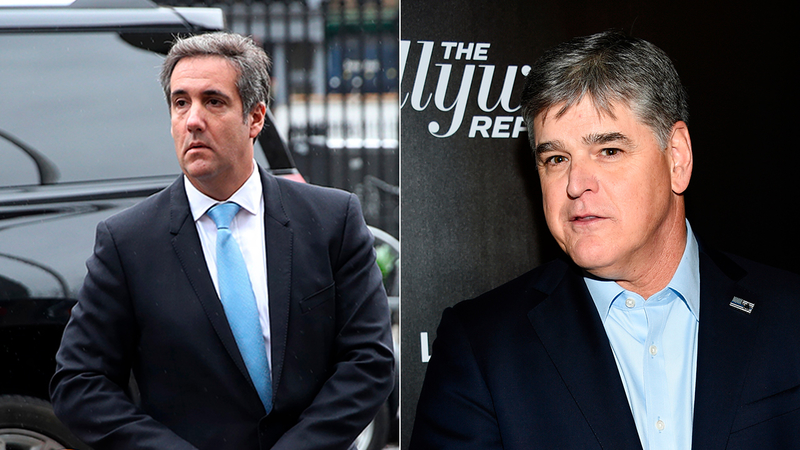 NEW YORK -- Sean Hannity shares a world view with President Donald Trump and on Monday it was revealed, with some reluctance, that he shares a lawyer, too.

The Fox News Channel prime-time host is Trump's most vocal defender on television, and a week ago he was on the air criticizing the FBI raid on the president's personal attorney Michael Cohen as evidence that Special Counsel Robert Mueller's "witch hunt" against the president has become a runaway train.

After it was revealed in a court hearing Monday that Cohen represented Hannity, Fox News did not say whether it knew that ahead of time, or whether Hannity had any ethical obligation to reveal that relationship to viewers. Network representatives instead referred reporters to Hannity's own statements. A threat to Hannity is a threat to Fox: His show is the most-watched program on the network and he runs neck-and-neck with MSNBC's Rachel Maddow as the most popular on-air cable news personality.

Monday's hearing before U.S. District Court Judge Kimba Wood in New York was about what should happen to seized material from Cohen. Cohen's lawyers did not want to publicly reveal that Hannity was a client, but Wood said that "I understand he doesn't want his name out there, but that's not enough under the law."

Hannity said on his radio show that he had never retained Cohen "in any traditional sense," but that he occasionally went to him with legal questions. While he said he had not paid Cohen, he believed their discussions were protected under attorney-client privilege. He later tweeted that he mostly asked Cohen questions about legal matters.

"It never, ever involved a matter between me and any third party," Hannity said.

During his live radio show, he seemed flustered that he was getting a steady stream of phone and email messages about it.

"I don't think this is such a big deal," he said. "Why do you think the media is going crazy on this?"

Hannity waited until the last five minutes of his TV show to discuss the issue, after showing clips of his name being said on rival television networks dozens of time. He said the media was "absolutely apoplectic and hyperventilating."

He repeated what he said on the radio, adding that it "never rose to any level that I needed to tell anyone."

That was an apparent answer to two personalities on his own network. On Fox's show "The Five," panelist Juan Williams said Hannity had some questions to answer.

"The question for me is, why Sean didn't disclose this earlier," Williams said.

One of the guests on Hannity's show, lawyer Alan Dershowitz, told Hannity that "you should have disclosed your relationship with Cohen when you talked about him on the show."

Hannity replied that the relationship was minimal and that he had a right to privacy. "It had to do with real estate and nothing political," Hannity told Dershowitz.

Besides supporting Trump on his show, Hannity reportedly talks to the president regularly and, last week, Trump even tweeted out a promotion, telling his followers that Hannity was going to have a big show coming up.

It's not the first time Hannity and Trump have shared a lawyer, either. Hannity, who said Monday that he had eight lawyers representing him in various matters, revealed last summer on his radio show that he had hired Trump attorney Jay Sekulow. Sekulow has been a frequent guest on Hannity's Fox show.

On his Fox show last Monday, Hannity said that the Cohen raid represented a "dangerous phase" of Mueller's investigation "and there is no turning back from this."

He said earlier that day, on his radio show, that a sense of "mission creep" had developed.

"It seems that there's no limit at all into the fishing expedition that Mueller is now engaged in and if he has access to everything that (Trump's) personal attorney has, I can only imagine where that's going to lead."

A week later, he found out.