How did March for Our Lives crowd size compare to Women's March, inaugurations? 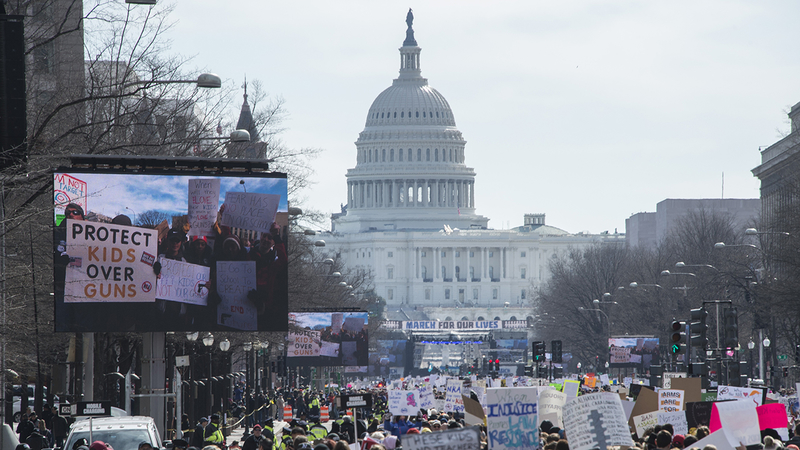 March for Our Lives: Scenes from around the country

WASHINGTON -- Massive crowds formed in the nation's capital for Saturday's March for Our Lives event, but exactly how many people turned out for the student-led call for an end to gun violence?

It's hard to say.

When asked for comment, march organizers only cited "reports published by major news organizations [that] put the crowd size at 850,000 people." (ABC is not one of those organizations).

An impressive crowd gathered today in DC for the #MarchForOurLives rally pic.twitter.com/hiPRYcb7OJ

Estimating crowd size is a difficult task, and even numbers produced by various media outlets and analysts vary widely, with some as low as 200,000 and others closer to the march's official estimate. Event organizers had applied for a permit for 500,000 attendees.

The National Park Service used to analyze aerial images of large events and rallies and produce an official crowd size estimate based on how tightly packed the crowd was, according to the Associated Press, but the agency stopped releasing those figures after the Million Man March. Organizer Louis Farrakhan threatened a lawsuit and alleged that racism and white supremacy led the agency to underestimate the crowd size, which varied widely among different sources.

Washington's Metropolitan Police Department also has yet to release any official crowd estimate.

In the absence of an official figure, some other attendance gauges have emerged. WMATA, the local agency in Washington responsible for the city's metro system, reported total ticketed ridership at 558,735 for the entire day, which it said at midday was two-and-a-half times the volume of a normal Saturday.

That figure, of course, also includes riders within the city who weren't traveling to or from the march, and there were demonstrators who don't take Metro to the march.

For comparison, the agency reported daily ridership above 1 million during President Barack Obama's inauguration in 2009 and the Women's March on Washington in 2017. The agency also saw ridership in the 800,000s on several days in recent years when there were multiple large-scale events happening in the city, like the National Cherry Blossom Festival, Washington Nationals and Wizards games and local concerts and conferences, according to the Washington Post.

Authorities in other cities did release firmer March for Our Lives attendance figures, with 175,000 demonstrators turning out in New York, 30,000 in Atlanta and Pittsburgh and 15,000 in Houston and Parkland, Florida, ABC News reported.