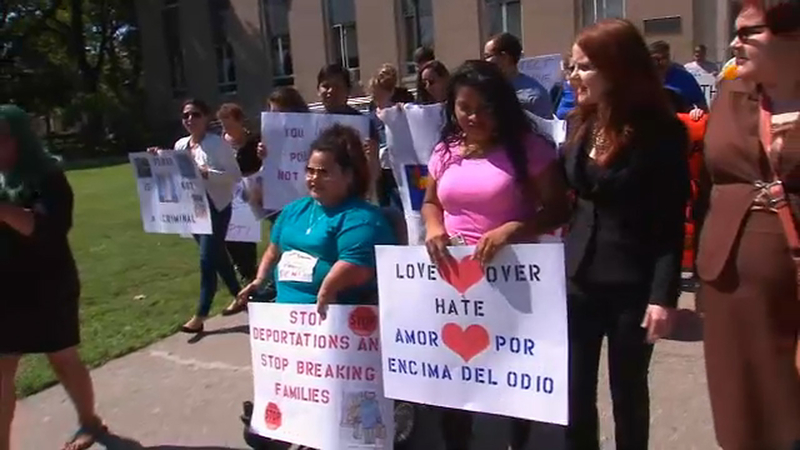 MINEOLA, Long Island (WABC) -- An immigration battle is raging in Nassau County, where dozens rallied in Mineola Wednesday on behalf of a man who was deported after being pulled over for a traffic violation.

Advocates say the move was unfair, but police argue there is more to the story.

Demonstrators marched from Nassau County police headquarters to County Executive Ed Mangano's office, demanding a change or clarification in county policy. They also want an explanation as to why 30-year-old Dennis Guerra Guerra was deported, an undocumented immigrant from El Salvador who worked as a baker and was an active youth leader in his local church.

He was deported a week ago following a traffic stop in early July, during which he was pulled over in Roosevelt for failure to signal while making a turn. Guerra had no driver's license, and was arrested on the spot after the officer discovered a standing deportation order from 12 years ago.

The county claims it does not deport over traffic violations, but authorities say they had no choice in this case.

The state DMV database interfaces with multiple agencies, but officers "will not inquire into any person's immigration status unless they are arrested for a crime," Acting Nassau County Police Commissioner Patrick Ryder said. "It was discovered through DMV that an 'outstanding administrative warrant of removal from the United States' was in effect."

Protesters insist police officers are not required to act on deportation orders, and that they have discretion in handling situations like these that occur during traffic stops. They claim a ticket should have been issued, and nothing more.

"I just hope that this never happens to any other family, because what we're going through right now is so difficult," she said through an interpreter. "We come here not to do anything wrong. We come here to find a better future for ourselves and our families."
Report a correction or typo
Related topics:
politicsmineolanassau countydeportationimmigration
Copyright © 2021 WABC-TV. All Rights Reserved.
More Videos
From CNN Newsource affiliates
TOP STORIES