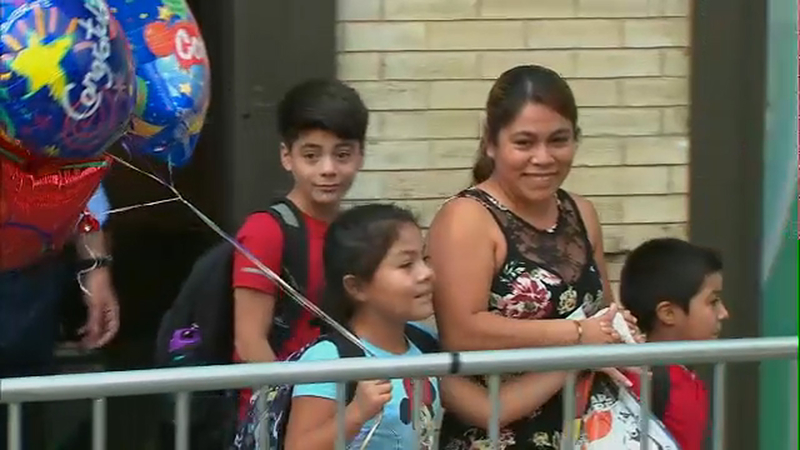 EAST HARLEM, Manhattan (WABC) -- There was a happy reunion in East Harlem that was months in the making, as a mother from Guatemala officially regained custody of her three children.

Yeni Maricela Gonzalez Garcia was separated from her kids when she crossed into the U.S. on May 19 as part of the Trump Administration's zero-tolerance policy. They were seeking refugee status, fearing their lives were in danger back home.

She was detained in Arizona, and since then, the kids were in foster care and only allowed to have short visits with family. The reunion took place at the Cayuga Center, the agency that placed 6-year-old Deyuin, 9-year-old Jamelin and 11-year-old Lester.
It was a joyous occasion as the children were released from federal custody and into their mother's waiting arms. It was part of a privately-funded nationwide fundraising effort to reunite separated families.

"The state has played a tremendous role, the city has been helpful, and I would say most of all, individual citizens who rolled up their sleeves and decided to be helpful," state Senator Michael Gianaris said. "Good, solid New Yorkers who raised money, who organized caravans and made this day possible."

The family is free, pending court cases. But they still could be denied refugee status and sent back to Guatemala.

Gonzalez, 29, was released from Eloy Detention Center in Arizona a few weeks ago and was driven cross-country by a team of volunteers. A group of New York-area parents and artists raised money through crowdfunding to cover her $7,500 bond and the trip expenses.Now, she says heart is full again.

A relative of Gonzalez who lives in North Carolina has applied to become the children's sponsor, but the application process, which includes fingerprint results, could take two months. Every adult living in a child's house must be included in the sponsorship petition, so the process is lengthy. Gonzalez will also apply to become a sponsor, even though she has no income, no legal status and no home of her own.