The date means Grimm's trial will take place after Election Day, when voters will choose between the embattled Republican and Democratic challenger Domenic Recchia, Jr., on November 4.

The judge rejected a defense motion to delay the trial another month.

The ad, which attacks Grimm over his indictment, uses highlights of Grimm's previous appearances in federal court, as well as a soundbite from U.S. Attorney Loretta Lynch. The tagline is "Can you believe this guy?"

The Congressman has been indicted on 20 counts, including tax evasion, fraud and conspiracy.

The charges are connected to his former health food restaurant on the Upper East Side in Manhattan.

Grimm, who has denied any wrongdoing, represents Staten Island and part of Brooklyn.

Authorities say that when he was deposed by an attorney representing former employees in a lawsuit, Grimm lied under oath about his allegedly fraudulent business practices.

"This political witchhunt was designed to do a couple of things, but first and foremost, assassinate my character and remove me from office," Grimm said. "We're going to fight tooth and nail until I am fully exonerated, so let me be perfectly clear. I will not abandon my post or the wonderful people who entrusted me to represent them."

Grimm has been dogged by allegations of campaign violations since his first campaign for Congress in 2009 and 2010. A House Ethics Committee announced in November that Grimm was under investigation for possible campaign finance violations.

Two of Grimm's former fundraisers have already been charged in connection with the investigation. 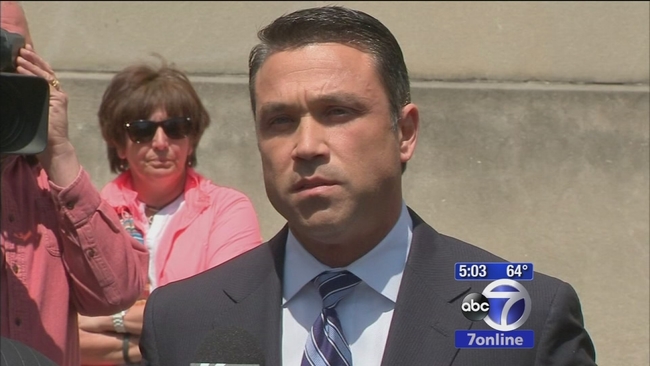