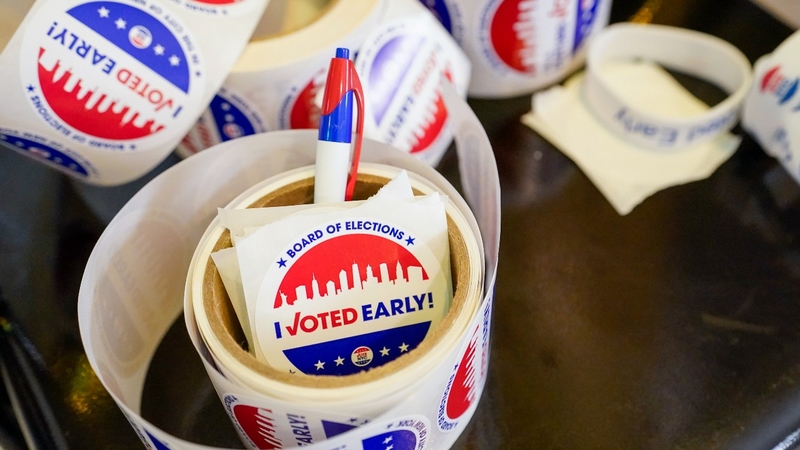 NEW YORK CITY (WABC) -- Primary Day in New York is just over a week away, and the race to be the Democratic nominee for New York City mayor is heating up.

Rising crime has been the big issue, but now, diversity is also a hot topic.

Early voting is underway, and already, more than 43,000 New Yorkers have headed to the polls to cast their ballot.

NJ Burkett has the latest on the New York City mayoral race.

He also ripped Garcia, saying that as sanitation commissioner, she ran a department that often funneleBd black and brown employees into lower paying jobs.

"We have to change the history of paying Black, brown, people in general, but specifically women, a lower rate than we're paying men," he said. "This is the embarrassment of our city."

Garcia shot back, saying her surging campaign is motivating Adams to go on the attack.

"As I said, I haven't been a politician," Garcia said. "And I guess the mud slinging has started, so I guess he knows we're in a two-person race."

The poll showed Adams at 24%, with Garcia running second at 17%. But with the new ranked choice voting system in place, it's unclear how the primary will play out.

"I left the Department of Sanitation more equitable than I found it," she aid. "I increased the number of chiefs and leaders in the department who are people of color by 50%. And when I'm mayor, I'll be able to do even more."

Yang also went after Adams, with an endorsement from the police captains union -- the one Adams once belonged to.

"The officers that have worked with him for years have chosen to endorse me as mayor today," he said. "This, to me, should tell New Yorkers all they need to know about Eric Adams and his leadership."

Adams hit back he never even sought the police union's endorsement.

Wiley, meanwhile, took advantage of early voting and later pledged that she's the candidate who can best reform the police department.

"Until we get policing right, until create the right balance and the right accountability, we will not have trust in the public and the New York City Police Department," she said. "I feel great, and let me just say I am the progressive that can win this race."