PHILADELPHIA -- Ever since the death of George Floyd, and the nationwide protests that caught-on-camera moment spurred, America has once again been grappling with the words 'Black Lives Matter.'

For some, the phrase is a call-to-action. For others, it's merely a verbal acknowledgment if deep-seated disparities that result in a host of injustices. For still more, though, the words are viewed through a political lens, as an affront to the notion that "all lives matter."

In recent days, Democratic lawmakers in Washington have been challenging their Republic colleagues to utter the phrase -- at times, giving way to some fiery exchanges. So far, just a handful of Republican members of Congress have done so.

On a historic Juneteenth, as protests continue to rage across America, Vice President Mike Pence was asked if he would say those words, 'Black Lives Matter,' and three times declined during an interview with our sister station WPVI-TV in Philadelphia.

Instead, Pence said "all lives matter in a very real sense."

The vice president, when pressed as to why he would not say the phrase, said, "Well, I don't accept the fact, Brian, that there's a segment of American society that disagrees in the preciousness and importance of every human life."

Below is the transcript of the interview between 6abc Action News anchor Brian Taff and Vice President Mike Pence:

Brian Taff: Mr. Vice President, thank you for your time, sir. Much appreciated.

Brian Taff: As these things tend to go, a lot of ground to cover and not a whole lot of time in which to cover it. But let's begin here, sir, as you know we are in the midst of a movement in this country. And, I think it's fair to say, in the estimation of those who are marching in the streets across America right now, a movement that is finally getting some traction. And as you know, sir, that movement is fueled by the words 'Black lives matter.' And yet, despite that, and the volume with which we're hearing it and the monumental nature of these changes, there are only really a handful of elected Republican leaders in Washington who have uttered those words - 'Black lives matter.' And I wonder, sir, if those are words that you will utter right here, right here today - 'Black lives matter.' Can you say those words?

Vice President Pence: Well, Brian, let me just say that what happened to George Floyd was a tragedy. And in this nation, especially on Juneteenth, we celebrate the fact that from the founding of this nation, we cherish the ideal that all of us are created equal and endowed by our creator with certain inalienable rights. And so all lives matter in a very real sense.

It's the reason why President Trump in the wake of that tragic event in Minneapolis said that justice would be served. We've met with law enforcement leaders. We've met with African American leaders.

I think the people of Philadelphia can be encouraged by the president's action this week. We're supporting law enforcement. We're not going to defund the police, but rather, we're going to fund new resources to law enforcement to raise the standards for the use of force for de-escalation, to make it possible to deploy personnel, social workers who can deal with challenging situations, people that are trained in dealing with homelessness, to prevent the kind of incident that we saw that take place. And we're encouraged by the fact that Senator Tim Scott and others in the Congress are moving forward.

We really believe that are steady march on this Juneteenth toward a more perfect union that we have an opportunity. But it's not a choice between law enforcement and our African American community. This is really a choice between supporting law enforcement and supporting and improving the lives of our African American families and our cities, and we're committed to doing just that.

Brian Taff: Forgive me for pressing you on this, sir, but I will note you did not say those words - 'Black lives matter.' And there is an important distinction. People are saying, 'of course, all lives matter.' But to say the words is an acknowledgment that Black lives also matter in a time in this country when it appears that there's a segment of our society that doesn't agree. So why will you not say those words?

Vice President Pence: Well, I don't accept the fact, Brian, that there's a segment of American society that disagrees in the preciousness and importance of every human life.

It's one of the reasons why as we advance important reforms in law enforcement, as we look for ways to strengthen and improve public safety in our cities, we're not going to stop there. I mean, I couldn't be more proud to be part of an administration that saw the lowest unemployment ever recorded for African Americans. We saw the creation of thousands of opportunity zones that are generating billions of dollars of investment to our cities. This is the administration and President Trump is the president who made permanent funding for historically Black colleges and universities. And we've been champions of educational choice because we believe that inner-city families, African American families ought to be able to choose where their children go to school regardless of their area code and income.

So while we acknowledge the concern of protesters, we respect the right of peaceful protesters, I must tell you that we're absolutely determined to improve the lives of our African American citizens with more job opportunities, more educational opportunities, and this administration will remain committed to doing what we've been doing all along.

Brian Taff: And yet, one final time, you won't say the words, and we understand your explanation.

I wanted to ask you about this. The president's tweets, I know a lot of people are reluctant to comment on them. Last night, he sent one that's been particularly - let's call it - reviled by some on the other side. They said this video that he showed really undermines the argument that people are making on the streets across America right now, basically dismisses the concept of racial injustice as fake news. Do you think that was an appropriate message from the president to America right now?

Vice President Pence: Well, are you speaking of the humorous video of the two little children?

Brian Taff: Humorous is in the eye of the beholder, I suppose.

Vice President Pence: Well, look, I think when you watch much of the national news media these days, Brian, it seems like they focus more every day on what divides us in this country. I think that the president saw an opportunity with a good sense of humor to once again challenge the media narrative.

As I travel around this country, I see a nation that is committed to expanding opportunities for every American. From the election night itself, when the president said his ambition was to be president of all the people of the United States, we've been working to do just that.

And so, I think the president's effort was to move beyond a lot of the divisiveness of some in the national media to say there are ways we can continue to come together, to love one another, to treat one another the way we want to be treated, and the tens of millions of Americans do that every single day.

Brian Taff: Sir, I've gotten the wrap, so if you got to go, you just say the word, but I feel it's important to get one question on the coronavirus issue as Philadelphia moves toward the green phase of reopening next week.

Last week, or rather earlier this week, the CDC praised Pennsylvania, calling it one of three states that had done a really fabulous job of mitigating the infection rate and really turning around the trend. Yet we've heard some alternate messaging from the president who's been critical of Pennsylvania's governor. Do you agree with the CDC? Has Pennsylvania, Philadelphia done a good job?

Vice President Pence: From the very beginning of this coronavirus pandemic and from the time the president asked me to the lead the White House Coronavirus Task Force, we had one mission and that was to save lives. It's the reason why the president suspended all travel from China. It's the reason why we issued guidelines to states like Pennsylvania for social distancing and the kind of measures that would slow the spread and flatten the curve. It was one of the reasons we passed the CARES Act to support families and businesses through this challenging time. And it's also the reason why we issued guidelines to open up America again. No one wants to open this country back up more than President Donald Trump. I know the president's made that very, very clear.

We're encouraged to see that now all 50 states including Pennsylvania are opening up their economies, allowing people to go back to work and to worship. The American people are demonstrating that we can do that in a safe and responsible way, and every single day we're one day closer to that day that we can say we put the coronavirus in the past. As we go forward, we'll be prepared for whatever comes next. We'll protect our most vulnerable and we'll continue to work around the clock to develop the medicines and the vaccines to confront this coronavirus in the future.
Report a correction or typo
Related topics:
politicsphiladelphiapennsylvaniablack lives mattervice president mike penceblack historycoronavirusmike pencepoliticspresident donald trumpjuneteenthcovid 19
Copyright © 2021 WABC-TV. All Rights Reserved.
VICE PRESIDENT MIKE PENCE 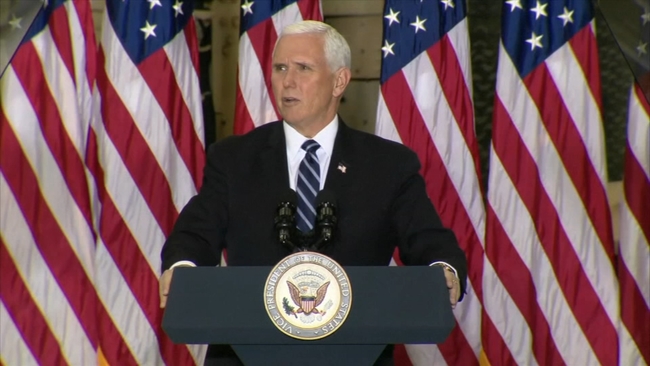 Pope says violence at the US Capitol must be 'condemned'