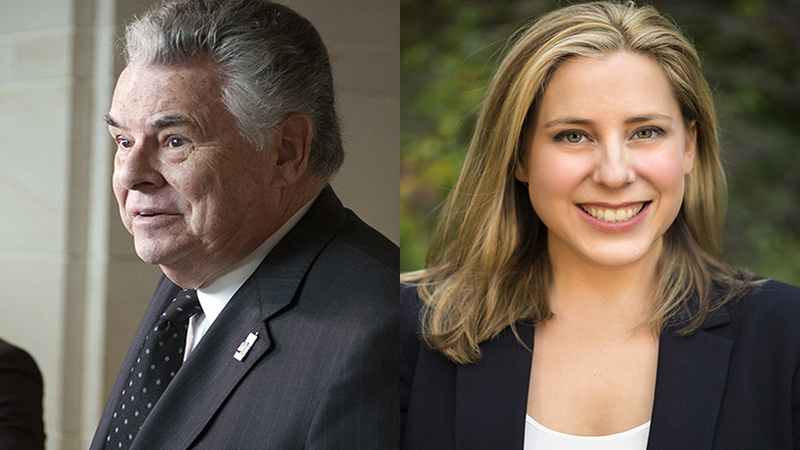 MASSAPEQUA, Long Island (WABC) -- 256 women are running for Congress and the Senate next Tuesday, many of them here in the Tri-State area.

One of them is giving 26-year-veteran Republican Rep. Peter King a run for his money.

Liuba Grechen Shirley is making her first run for office in the 2nd congressional district, Nassau County on Long Island.

Could King, elected to Congress in 1982, actually be vulnerable and lose next week?

The experts say it's unlikely but possible. They've moved the district out of the solid Republican column.

Grechen Shirley has never run for office before, and unlike a lot of Democrats, she's not campaigning so much against Donald Trump. She's squarely focused on Peter King.

"No honestly I've had enough," said Grechen Shirley. "We've had people in office for decades, career politicians who only make time to listen to their corporate donors. Peter King has been in office since I was 12 years old."

"I've been picked the most bi-partisan member of Congress four years in a row," King says in his new TV ad that shows him with lots of Democrats, but not with the president at all.

"I think Donald Trump himself breaks even," said King. "Every poll I've seen is like 48-49 or 49-48 with Donald Trump but I have an independent record."

King knows his district that includes Islip, Babylon and Levittown is almost 50-50 Democrat, Republican. He has to appeal to both parties.

Grechen Shirley made news this year when federal election officials granted her permission to use campaign money to care for her two children.

She is certainly an unusual candidate, and says it's time for King to go. "Peter King is out-of-touch. He's become complacent," she said.

The district voted twice for Barack Obama, then switched two years ago and went with Trump. Next week voters must decide whether to become part of the blue wave of 2018 or stick with their long-time Republican incumbent.