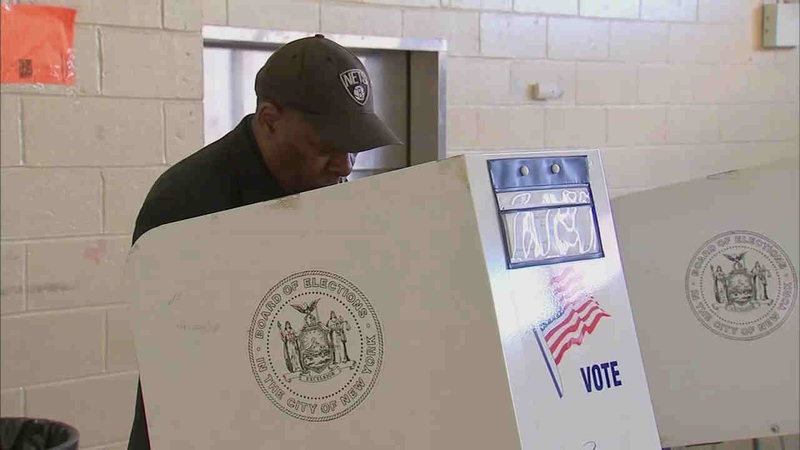 BEDFORD-STUYVESANT, Brooklyn (WABC) -- New York City's comptroller announced Tuesday that his office will audit the Board of Elections after numerous voting issues were reported in Brooklyn.

Scott Stringer said the audit will look at the operations and management of the BOE because of "widespread reports of poll site problems and irregularities."

According to Stringer, the biggest issue appears to be that some eligible voters were removed from voter-registration rolls and some that had their party affiliation changed.

"This is the most important election today that we've had in decades. The next president of the United States could very easily be decided tonight and yet the incompetence of the Board of Elections puts a cloud over these results and it's time that we clean up this mess," said Stringer.

Here are the four issues Stringer said his office will investigate:
1) Why some polling sites -- like at the Williamsburg Community Center -- didn't open at 6 a.m. when they were supposed to.
2) Why 60,000 voters received notices last month saying the primary date was in September. Another letter was sent afterward to fix the mistake.
3) How election workers are trained. He said he has numerous complaints about inadequate staffing and unprepared workers.
4) Why the voters were removed from the rolls.

Eyewitness News talked with a poll worker at a polling location in Brooklyn.

The workers showed up at the polls at PS 73 in Bedford-Stuyvesant Tuesday morning and so did voters, except they didn't all have time to vote.

"I mean, it was bad," said Sade Chadwick, a polling site worker.

"What was your biggest concern when you see the crowd out front?" Eyewitness News asked.

"That we want them to vote, all votes count," Chadwick said.

"It was just a whole bunch of people outside waiting and like, why's this happening?" said Jona Jeffreys, a polling site worker.

No access to supplies is why they same problem here at PS 137 nearby.

But at a polling site in the Atlantic Terminal Community Center, the worker was also nowhere to be found and no one could get in for several hours.

Also, there was no worker at the Cooper Park Houses in East Williamsburg where voter Ben Casselman tweeted stating" "Two hours after polls are meant to open in Brooklyn, and OUR polling place isn't ready."

Two hours after polls are meant to open in #Brooklyn and our polling place isn't ready. #NYPrimary pic.twitter.com/58KUvKPMuU

And speaking of all votes counting, 73-year-old Anna Albritton, a registered democrat voting at PS 5 for years, was suddenly told her name was not on the list.

"For a situation to arise like this, and I can't vote? It's not fair to me," Albritton said.

"There is nothing more sacred in our nation than the right to vote, yet election after election, reports come in of people who were inexplicably purged from the polls, told to vote at the wrong location or unable to get in to their polling site," Comptroller Stringer said. "The people of New York City have lost confidence that the Board of Elections can effectively administer elections and we intend to find out why the BOE is so consistently disorganized, chaotic and inefficient. With four elections in New York City in 2016 alone, we don't have a moment to spare."

In response to the situation, Mayor Bill de Blasio also released a statement in support of the comptroller.