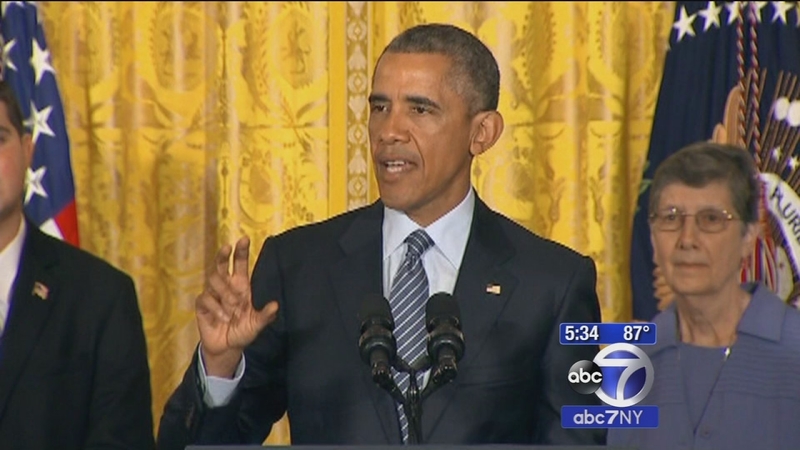 WASHINGTON -- President Barack Obama unveiled the final version of his plan to dramatically cut emissions from U.S. power plants, as he warned anew that climate change will threaten future generations if left unchecked.

Touting the plan at a White House event on Monday, Obama said the unprecedented carbon dioxide limits are the "the single most important step" America has ever taken to fight climate change. He warned that because the problem is so large, if the world doesn't get it right quickly, it may become impossible to reverse, leaving populations unable to adapt.

Obama's move represented a challenge to the rest of the world to take serious action as a global summit to finalize a landmark climate change treaty approaches at the end of this year.

Obama's actions on climate change have faced opposition from Republicans and even some Democrats who fear the impacts on the U.S. economy. The issue is already being raised among candidates for next year's presidential election, as much of the work will lie with his successor. Democratic front-runner Hillary Rodham Clinton has already expressed support.

"There is such a thing as being too late when it comes to climate change," Obama said.

The final version of Obama's plan imposes stricter carbon dioxide limits on states than was previously expected: a 32 percent cut by 2030, compared with 2005 levels, the White House said. Obama's proposed version last year called only for a 30 percent cut.

It also gives states an additional two years - until 2022 - to comply, yielding to complaints that the original deadline was too soon. States will also have an additional year to submit their implementation plans to Washington.

Obama was joined in the East Room by Environmental Protection Agency Administrator Gina McCarthy and by parents of asthma patients. The Obama administration has sought to draw a connection between climate change and increased respiratory illness in vulnerable populations.

The pollution controls form the core of Obama's ambitious and controversial plan to drastically reduce overall U.S. emissions, as he works to secure a legacy on fighting global warming. Yet it will be up to Obama's successor to implement his plan, which has attracted strong opposition from Republican presidential candidates.

Opponents announced immediately that they will sue the government, and will ask the courts to put the rule on hold while their legal challenges play out. Many Republican governors have said their states simply won't comply.

The Obama administration estimated the emissions limits will cost $8.4 billion annually by 2030. The actual price won't be clear until states decide how they'll reach their targets. But energy industry advocates said the revision makes Obama's mandate even more burdensome, costly and difficult to achieve.