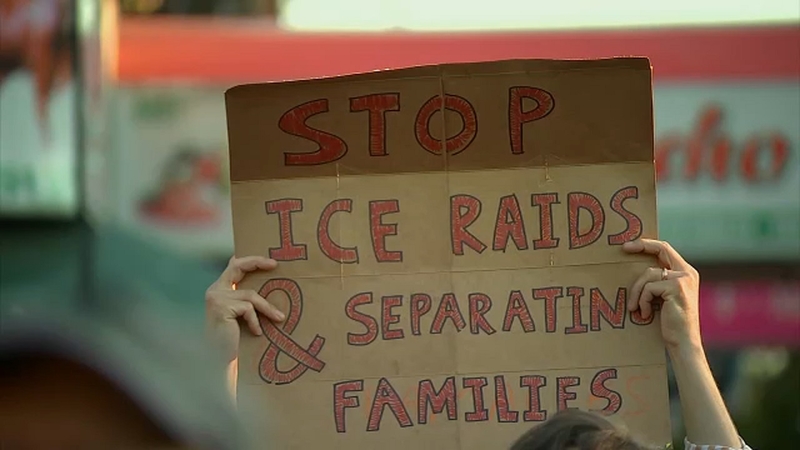 "My parents are home. They're not going anywhere. So is rest of family. They're just very scared," said Melina Hernandez.
Hernandez, 23, was born in the United States, but her parents, aunts and uncles are here without papers. She says they have not left the house this weekend out of fear. She is especially worried about her father who is on dialysis. She says if he is forced back to Mexico, he would not get the same quality medical treatment he desperately needs.

As Federal Agents try to arrest those without documentation, communities across the area that are rich with immigrants are offering sanctuary and hope.

This rally began w a pretty large showing but about half the crowd left when they heard there might be ICE agents nearby. Some ran for cover, while others ran to confront. In the end, Eyewitness News does not believe anyone was arrested.

"I think their resources should be channeled to find more human solution for our communities," said Pastor Juan Carlos Ruiz of Good Shepherd Lutheran Church.

Protestors say laundromats and shops were closed Sunday because so many undocumented immigrants did not go to work - this was to underscore how important they are to the economic landscape.

Cuomo released the following statement:
"There are multiple reports that the Trump Administration will launch its previously announced blitz of ICE raids across the country this Sunday, including here in New York. This shameful assault on families across the country will no doubt lead to further separations of children from their parents and 'collateral arrests' by ICE, where individuals with no orders of deportation will be detained. This politically motivated directive is despicable and inhumane, and New York will fight it. I have asked the state's Liberty Defense Project to be on high alert to assist families in need of legal services. I encourage all New Yorkers to be familiar with their rights - especially when confronted by ICE or CBP - and anyone in need of assistance may contact the Liberty Defense Project via the New York State New Americans Hotline at 1-800-566-7636 or liberty@dos.ny.gov. As I said when the Trump raids were first announced: America's only threat is from within, and while this federal administration governs by fear and division, in New York we know that diversity is our greatest strength and we will do everything in our power to protect our immigrant communities."

"In anticipation of the Trump Administration's threatened ICE raids, we are proactively reaching out to our immigrant communities to make sure they know we stand with them and are prepared to do whatever we can to protect them. Let's be clear: The Trump Administration's fear-mongering is un-American and dangerous. These raids do not make us safer; they will only make the work of local law enforcement more challenging and increase fears in our hardworking immigrant communities. Any family who needs legal representation should know there are many pro bono legal services available to them. We will be doing everything we can to highlight these resources and to make sure our immigrant communities know their rights and feel at home."

The ACLU is also filing a lawsuit, arguing defendants need an opportunity to plead their case to an immigration judge before getting deported.