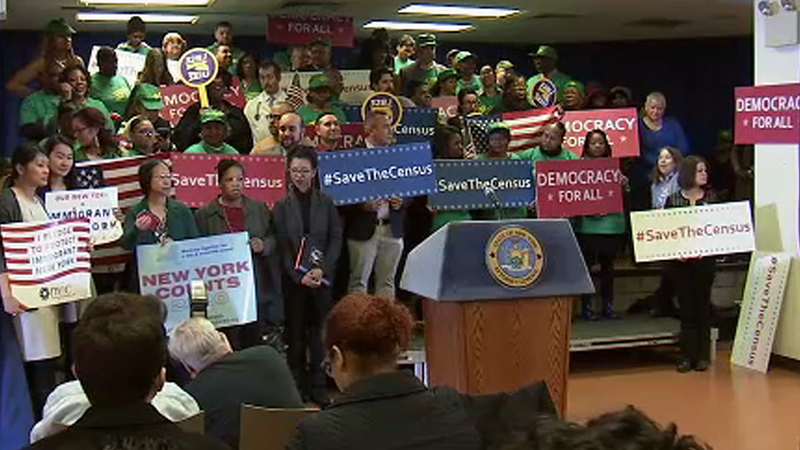 NEW YORK CITY (WABC) -- Seventeen states, the District of Columbia and six cities sued the U.S. government Tuesday, saying a plan to add a citizenship demand to the census questionnaire is unconstitutional.

"This citizenship question is just a scare tactic," Schneiderman said. "It's trying to scare immigrants that call United States home."

The lawsuit contends the question is designed to depress participation in the census, which would adversely affect predominantly Democratic states with large immigrant populations, such as New York and New Jersey.

Ever since 1790, the U.S. Census has sought to provide a fair and accurate accounting of the American population. The numbers are used for Congressional representation, Electoral College votes and to distribute more than $700 billion in federal money.

The lawsuit accuses the Trump administration of breaking with decades of practice in demanding to know citizenship status.

"This is a brazen attempt by the Trump administration to cheat on the census," Rep. Jerry Nadler, (D-NY) said. "To undermine the accuracy of the census."

In 1980, the Census Bureau rejected the addition of a citizenship question, saying, "Any effort to ascertain citizenship will inevitably jeopardize the overall accuracy of the population count."

And in 1979, eight former census directors, who served under both Democratic and Republican presidents, affirmed a citizenship question would undermine the purpose of the census itself.

A government spokesman did not immediately comment on the filing.

Several states already have joined a separate lawsuit filed by California's attorney general last week that seeks to block the citizenship question from being added to the census questionnaire.