His slogan is "Working People First," and he joins more than 20 other candidates vying for the Democratic nomination.

The mayor then traveled to Iowa, where he made his first stop at an ethanol facility. However, before he left, he exchanging barbs with President Donald Trump.

"The Dems are getting another beauty to join their group. Bill de Blasio of NYC, considered the worst mayor in the U.S., will supposedly be making an announcement for president today," Trump tweeted early Thursday. "He is a JOKE, but if you like high taxes & crime, he's your man. NYC HATES HIM!"
EMBED More News Videos

De Blasio dished out his own gibes.

"I'm going to keep calling him 'Con Don' because that's what he deserves to be called," de Blasio said after declaring his candidacy. "He's a con man, and we New Yorkers know a con man when we see one."

De Blasio believes he is the one who can beat Trump and is showing he is ready to go to his level.

We're coming for you, #ConDon pic.twitter.com/l0EujCt007

The mayor has four campaign stops in Iowa as he tries to win over voters in nine months. He will then make his way to South Carolina on Saturday.

A Quinnipiac University poll back in April found that 76 percent of New Yorkers do not think de Blasio should run for president. The same poll found that 47 percent of respondents thought a de Blasio campaign would be bad for New York City.

De Blasio is not the first New York City mayor to run for president.

Back in 1972, Mayor John Lindsay launched a bid for the White House. After he left office, Rudy Giuliani ran for the Republican nomination. Neither candidate did well in the early voting states. 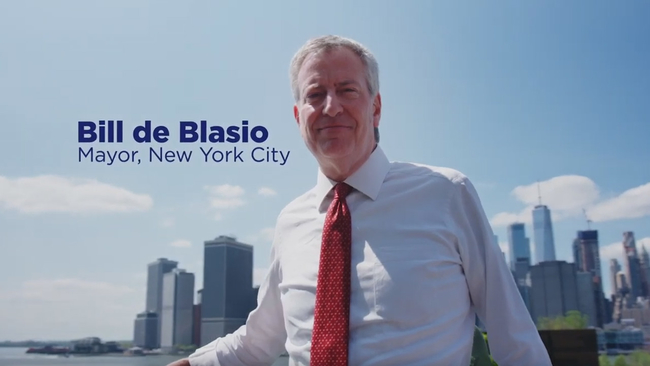