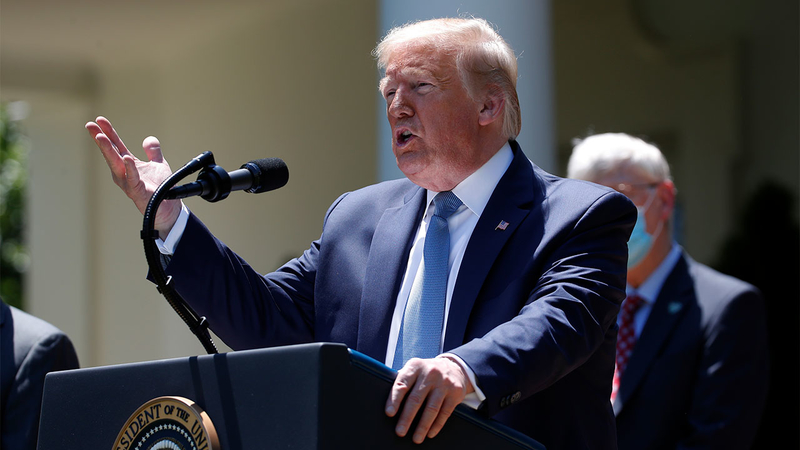 Trump: Hope to have COVID-19 vaccine for entire public by January

WASHINGTON -- President Donald Trump vowed to use "every plane, truck and soldier" to distribute COVID-19 vaccines he hopes will be ready by year's end - even as the country's top scientists gear up for a master experiment to rapidly tell if any really work.

Trump on Friday declared the vaccine program he calls "Operation Warp Speed" will be "unlike anything our country has seen since the Manhattan Project."

The goal is to have 300 million doses in stock by January, a huge gamble since a vaccine never has been created from scratch so fast - and one that could waste millions if shots chosen for the production line don't pan out. As the manufacturing side gets into place, the National Institutes of Health is working in parallel to speed the science.

At least four or five possible vaccines "look pretty promising" and one or two will be ready to begin large-scale testing by July with others to follow soon, NIH Director Francis Collins told The Associated Press.

"The big challenge now is to go big and everybody is about ready for that. And we want to be sure that happens in a coordinated way," Collins said.

That year-end goal is a "very bold plan ... a stretch goal if there ever was one," he said in an interview late Thursday.

Worldwide, about a dozen vaccine candidates are in the first stages of testing or poised to begin, small safety studies in people to look for obvious problems and whether the shots rev up the immune system. Among those getting the most attention are one created by the NIH and Moderna Inc., and a different type created by Britain's Oxford University.

Current tests "are looking pretty good," Collins said. "But until you put it into the real world and check it out you don't really know. You can't skip over that really, really hard part of testing this in thousands and thousands of people."

For those next-step studies, NIH is working with some of the world's largest pharmaceutical firms to create a master plan so each potential vaccine is tested the same way, using the same database, instead of each company devising its own methods. That partnership - called ACTIV or Accelerating COVID-19 Therapeutic Interventions and Vaccines - is like an umbrella where vaccine makers can sign on when they're ready to start enrolling.

Some key questions are how those at highest risk from COVID-19, such as older adults and people with chronic health problems, will respond to the shots.

"If you had a vaccine that only worked for 20-year-olds and didn't work for 70-year-olds, that would not be a success," Collins said.

Moncef Slaoui discusses Operation Warp Speed at the White House on Friday, May 15.

The project also will work on new treatment and testing options, but vaccines are a priority.

"When a vaccine is ready, the U.S. government will deploy every plane, truck and soldier required to help distribute it to the American people as quickly as possible," Trump said in a Rose Garden event.

The World Health Organization and global health leaders have made clear that any vaccine must be shared equally between rich and poor countries. Trump said the U.S. would work with other countries, no matter who found a vaccine first.

"We have no ego when it comes to this," he said. He later added, "the last thing anybody's looking for is profit."

Slaoui, a veteran vaccine developer, said the goals are "very credible," but added, "I also believe they are extremely challenging."

Some groups are questioning Slaoui's financial conflicts of interest; he has resigned from Moderna's board.

In recent weeks, senior White House officials and allies have thrown their support behind "Operation Warp Speed" amid concerns that the economic rebound the president is betting his reelection on will require a reliable vaccine. Still, Trump was insistent that the U.S. would reopen regardless of the success of the effort.

"Vaccine or no vaccine, we're back," Trump said, as states begin to reopen despite fears of a second wave of the virus.

Despite all the emphasis on speed, Collins stressed that "no corners are going to be cut" on safety and scientists will be carefully looking for side effects.