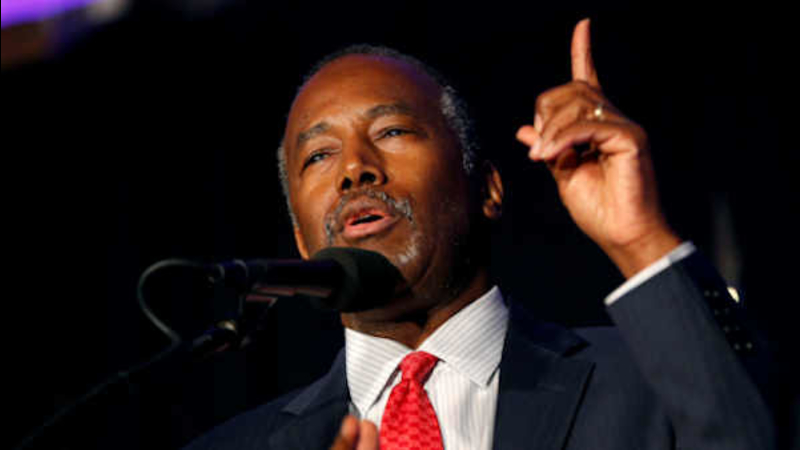 NEW YORK -- Donald Trump chose retired neurosurgeon Ben Carson on Monday to be secretary of the Department of Housing and Urban Development, raising fresh concerns about the lack of experience some of Trump's Cabinet picks have with agencies they're now being chosen to lead.

Carson, who opposed Trump in the Republican primaries, has no background in government or running a large bureaucracy.

In addition, South Carolina Gov. Nikki Haley, Trump's choice to be ambassador to the United Nations, has no foreign policy experience. Steve Mnuchin, a former Goldman Sachs partner and Hollywood executive, is Trump's man to lead the Treasury Department but has never worked in government. And retired Gen. James Mattis, a widely praised battlefield commander, spent decades in the Marines but now is tapped to run the nation's largest government agency, the Defense Department, with 740,000 civilian employees in addition to 1.3 million service personnel.

Democrats swiftly criticized Carson's qualifications for his job. House Democratic leader Nancy Pelosi called him a "disconcerting and disturbingly unqualified choice." And New York Sen. Charles Schumer said he had "serious concerns about Dr. Carson's lack of expertise and experience in dealing with housing issues. Someone who is as anti-government as him is a strange fit for housing secretary, to say the least."

Carson would oversee a budget of nearly $50 billion that provides rental assistance for more than 5 million households. Demand for that assistance is high in part because housing costs are rising faster than incomes. HUD also promotes home ownership with the Federal Housing Administration underwriting about 1 in 6 mortgages issued in the U.S. The agency is charged with enforcing federal fair housing laws, too.

In a statement, Trump said he was "thrilled to nominate" Carson, describing his "brilliant mind" and his passion "about strengthening communities and families within those communities."

Carson, who grew up poor, quickly endorsed Trump after ending his own presidential bid despite Trump noting what he called Carson's "pathological temper." Carson has been coy about joining the new administration, saying shortly after Trump's election victory that he wasn't certain he'd fit into a Cabinet-style role in a job like Health and Human Services secretary.

"Ben shares my optimism about the future of our country," Trump said, "and is part of ensuring that this is a presidency representing all Americans."

Heading a Cabinet agency is a huge bureaucratic job, with responsibility for overseeing massive budgets and thousands of employees. Choosing a leader without management experience could present challenges, warned Ben Chang, who worked under three different administrations.

"People can learn the policies and the talking points, but the transition will be dictated by their own managerial style," said Chang, who remembered incoming Secretary of State Colin Powell walking the halls to meet with career officers and not just his executive staff.

Trump's selections also highlight a frequent divide between the two major political parties in their strategies in filling out a Cabinet: In early 2009, Republicans criticized incoming President Barack Obama for not making enough selections with private sector experience.

On Monday, Trump received a fresh stream of visitors to the New York skyscraper that bears his name. His most surprising guest was Democratic former Vice President Al Gore. Transition officials said early Monday that Gore would meet with Trump's daughter, Ivanka, about climate change, which is Gore's signature issue.

But Gore said he also met with Trump directly and the two had a "very productive conversation."

"It was a sincere search for areas of common ground," said Gore, who did not detail what the men discussed. The president-elect has called man-made climate change a hoax and has pledged to undo a number of regulations designed to protect the environment.

Former South Carolina labor chief Catherine Templeton also met with Trump on Monday. She told The Associated Press the meeting was "productive" and she hoped to help the administration in any way she could.

Templeton, a labor lawyer who specialized in fighting unions, ran South Carolina's Department of Labor, Licensing and Regulation at the request of Gov. Nikki Haley for just over a year. She was one of the first Cabinet appointees by Haley, who played up Templeton's union-fighting background and ability to keep unions out of the new Boeing Inc. assembly plant in North Charleston.

A source close to the transition confirmed Templeton was under consideration for labor secretary. The source spoke anonymously due to lack of permission to speak about the process publicly.

Separately, New York City Mayor Bill de Blasio said he's asking the government for $35 million to cover costs related to protecting Trump, who has indicated he will largely work out of Trump Tower before his inauguration. Trump will continue his "thank you" tour with a stop Tuesday in North Carolina.

His running mate, Mike Pence, told reporters that "decisions were made" Monday that would be announced in the coming days. It was unclear if one of those was Secretary of State, for which Trump has expanded his pool of candidates beyond the four finalists his aides identified last week.

Over the weekend, two people close to the transition told The Associated Press that Trump is moving away from two of the four: former New York City Mayor Rudy Giuliani and Mitt Romney, the 2012 Republican presidential nominee.

That would leave former CIA Director Petraeus, who pleaded guilty to leaking classified information, and Tennessee Republican Sen. Bob Corker, chairman of the Senate Foreign Relations Committee. Among other possibilities, one official says, is Jon Huntsman, a former Republican Utah governor who also served as the ambassador to China and speaks Mandarin.

The people close to the transition spoke on condition of anonymity because they were not authorized to discuss the private process publicly.

Meanwhile, the president-elect dined at one of his favorite New York restaurants, 21 Club, Monday night with this family. He ate at the same Midtown Manhattan restaurant last month but did not notify the reporters and photographers who follow his movements, drawing criticism from journalist groups. The press pool did travel with Trump to the restaurant Monday and waited outside in a van while the president-elect ate.
Related topics:
politicsdonald trumpben carsonpolitics
Copyright © 2021 by The Associated Press. All Rights Reserved.
TOP STORIES
Suspect fatally shot by agents during kidnapping investigation in NJ
LIVE | NJ Gov. Murphy holds COVID update
NYC ready to move homeless out of hotels, back to shelters: Mayor
Violent, multi-vehicle crash leaves 2 dead, 3 injured in NJ
What to buy and what to skip on Amazon Prime Day
NYC to hold vaccination contest for $2,500 prizes in July
80-year-old rescued, 3 hurt as flames shoot from NYC apartment building
Show More
NY officer charged in high-speed crash that killed motorcyclist
NYC renames parks to honor Black American experience
LIVE: Biden speaks after hours of talks with Russia's Putin
MacKenzie Scott's $2.7B donation: At least 8 NY area recipients
Man wanted for brutally beating man in head with cobblestone
More TOP STORIES News