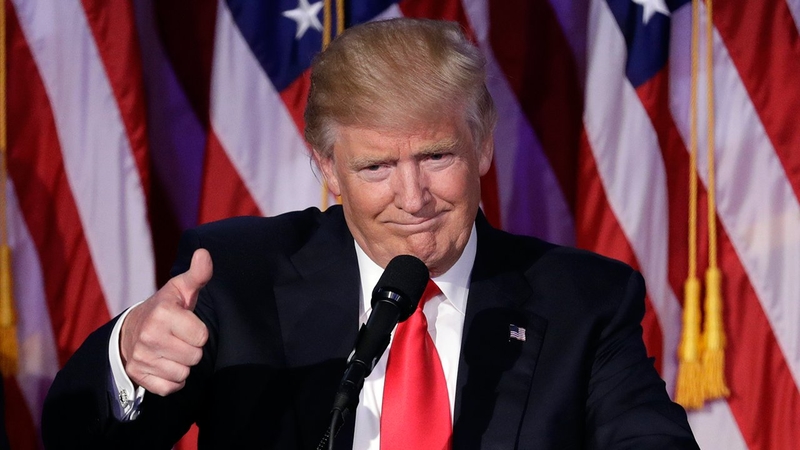 NEW YORK (WABC) -- Donald Trump was elected America's 45th president Tuesday, an astonishing victory for a celebrity businessman and political novice who capitalized on voters' economic anxieties, took advantage of racial tensions and overcame a string of sexual assault allegations on his way to the White House.

Democrat Hillary Clinton conceded the presidency to Trump in a phone call early Wednesday morning, a stunning end to a campaign that appeared poised right up until Election Day to make her the first woman elected U.S. president.

Trump's triumph over Clinton, not declared until well after midnight, will end eight years of Democratic dominance of the White House. He'll govern with Congress fully under Republican control and lead a country deeply divided by his rancorous campaign against Clinton. He faces fractures within his own party, too, given the numerous Republicans who either tepidly supported his nomination or never backed him at all.

"I say it is time for us to come together as one united people," Trump told supporters at a Midtown hotel near his Trump Tower campaign headquarters, vowing to unify a deeply divided nation.

He said he had spoken by phone with Clinton and they had exchanged congratulations on a hard-fought race.

"For those who have chosen not to support me in the past, of which there were a few people, I'm reaching out to you for your guidance and your help so we can work together and unify our great country," he said, the stage crowded with family and his most loyal allies.

Clinton, who watched the returns hunkered down with family and close aides at a Manhattan hotel suite, made no public appearance before supporters who had gathered under the glass ceiling of the Jacob K. Javits Convention Center planning to celebrate what was expected to be her historic victory. Clinton planned to make a statement later Wednesday morning. Her supporters were told to go home for the evening.

In a tight race that was not decided until after 2 a.m., Trump won nearly all of the competitive battleground states, claiming Florida, Ohio, North Carolina and others.

The Republican also carried Pennsylvania and Wisconsin, states that hadn't voted for a GOP presidential candidate since the 1980s.

Americans needed to choose whether they thought Clinton should be the nation's first woman to hold the office of commander in chief, or if the billionaire businessman really could "make America great again."

Both seemed to easily win the states they were expected to win and it all came down to the tight races in the battleground states.

By Wednesday morning, ABC News projected Trump with a 278-218 lead in the Electoral College, putting him over the 270 needed to win.

This team has so much to be proud of. Whatever happens tonight, thank you for everything. pic.twitter.com/x13iWOzILL

The uncertainty sent markets tumbling across Asia, reflecting investor concern over what a Trump presidency might mean for the economy and trade. The president-elect's speech helped the markets recover to some extent.

Clinton's stunned advisers went silent for long stretches of the night. As the results rolled in, the candidate tweeted to supporters, "Whatever happens tonight, thank you for everything."

The Republican Party's tortured relationship with its nominee was evident right to the end. Former President George W. Bush and wife Laura Bush declined to back Trump, instead selecting "none of the above" when they voted for president, according to spokesman Freddy Ford.

House Speaker Paul Ryan, a reluctant Trump supporter, called the businessman earlier in the evening to congratulate him, according to a Ryan spokeswoman. Senate Majority Leader Mitch McConnell said the American people "have chosen a new direction for our nation."

Locally in the Tri-State area, all eyes in New York State were on Sen. Charles Schumer (D). The three-term Democrat won his seat easily, and will become the Senate Minority Leader.

In New Jersey, the state's 5th Congressional District went to Democratic challenger Josh Gottheimer. Incumbent Republican Scott Garrett lost the seat he's held for 13 years. Garret had been criticized by comments he made about not supporting House Republican fundraising due to their support for gay candidates.