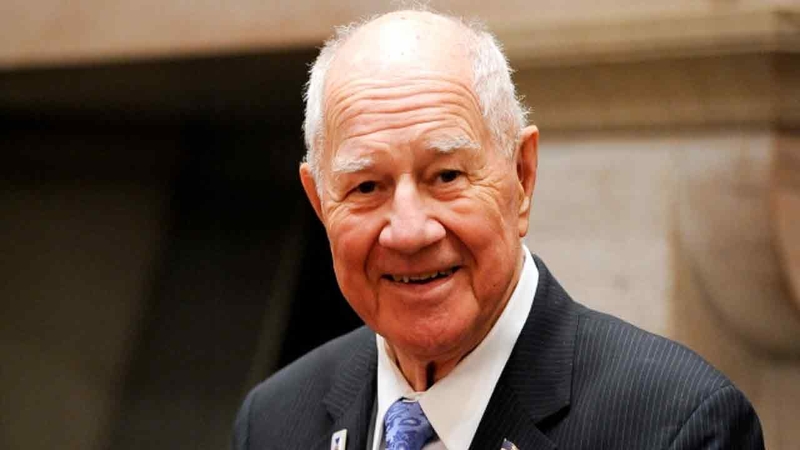 NEWBURGH, Orange County (WABC) -- New York State Senator William Larkin, who is believed to be one of the last World War II veterans serving in a state legislature, has retired.

Larkin, who is known as Bill, is a Republican from Cornwall-On-Hudson and has served the 39th District for four decades.

Monday was a bittersweet day for Senator Larkin as he gathered with a large cheering group of family, friends and supporters at his retirement send-off at the Newburgh Armory Unity Center.

"May goodness and kindness follow you all the days of our life. Thank you, Senator," said Howard Phillips the Supervisor of Haverstraw.

At 90 years old, Larkin has served his constituents for 40 years, first as an Assemblyman in 1979 and as Senator since 1990.

"I was elected to carry out the will of the people, not to be the hero of Bill Larkin," he said.

Devoting his life to service, Bill first went into combat at age 16, fighting in World War II and Korea. After serving in the military for 23 years he retired as Lieutenant Colonel.

"I think commanding troops was the greatest experience ever," he says.

One of his proudest accomplishments years later was to help create the Purple Heart Stamp issued by the U.S. Postal Service.

His core beliefs in his service are easily found as he reminisced with his wife Patricia and his longtime staff members on his last day at his district office in New Windsor.

"What an honor it has been to work for you and for giving us the opportunity to serve the constituents of the 39th senate district," said Communications Director Brian Maher.

But the Senator was quick to add, "Cooperation, teamwork always produces positive results."

Patricia Larkin also thanked the staff saying, "You are excellent, and I don't think anybody will ever have a staff like he has had. Thank you."

Another of his proud accomplishments was to help establish the Newburgh Armory Unity Center, a vital community center for children and adults.

And what does he still hope to accomplish? He answered with a question.
"What do we do to get together to make everybody have a better quality of life and a better opportunity to enjoy where they live and work and play?" he asked.

With 70 years of service to his country and his community, many appreciate Bill Larkin for a heartfelt job well done.