Pompeo to headline fundraiser for Christian charity in swing-state Florida 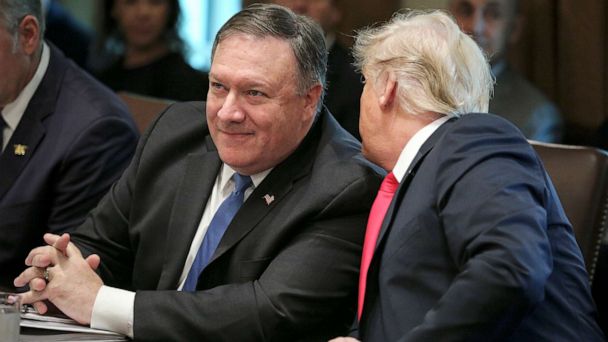 Secretary of State Mike Pompeo will be the keynote speaker at a fundraiser for a conservative Christian charity next weekend, marking another foray into politics for the top U.S. diplomat.

The fundraiser, with its $10,000 tickets for "a personal visit with Secretary of State Mike Pompeo," may cross legal lines, according to ethics experts.


It will be Pompeo's second stop in a state considered a presidential battleground in as many weeks, with the 2020 election looming large on the horizon. Pompeo has been criticized for blurring the line between his official and personal capacity or stepping too far into domestic politics, including his remarks to the Republican National Convention in August.

The Florida Family Policy Council is hosting the gala Oct. 3 in Orlando, according to its invitations, which list Pompeo as "keynote speaker" and "celebrate 15 years of fighting for Florida's families to protect the unborn, natural marriage, religious liberty, and more!"

The event will raise funds for the charity, a legally registered 501(c)(3) that is affiliated with Focus on the Family, Alliance Defending Freedom and Family Research Council. Earlier this week, Pompeo was interviewed by FRC President Tony Perkins as part of his organization's Values Voter Summit.

Federal ethics regulations allow officials to deliver speeches at fundraisers if their remarks focus on their official duties and they don't actively solicit donations for the group. But those activities must be authorized as "consistent with the agency's mission or otherwise further[ing] agency programs."

"I honestly can't imagine how it could be in an official capacity to raise funds for this organization," said Kathleen Clark, a government ethics scholar, of Pompeo's appearance. "It's so far afield from the State Department's function."

Beyond the restrictions on fundraising, Pompeo's appearance may also violate rules about using public office for private gain, according to Clark, because FFPC is offering $10,000 tickets for "a personal visit with Secretary of State Mike Pompeo" and its leadership and $5,000 and $3,000 tickets to a VIP reception with him.


"What he's doing is using his capacity as Secretary of State to enable this non-government entity to raise money off of it -- and that is using public office for private gain, which is improper," Clark, who teaches at Washington University in St. Louis School of Law, told ABC News.

The State Department did not respond to a request for comment, including whether Pompeo is appearing in his official or personal capacity.

Pompeo addressed the Republican National Convention in August in an unprecedented speech, but the department and the RNC said it was in his "personal capacity."

FFPC's gala invitations refer to him as the Secretary of State though, making it more difficult for the State Department to say he's there in any personal capacity, according to Kedric Payne, general counsel and senior director of ethics at the nonpartisan Campaign Legal Center.

But Payne said Pompeo may be on firmer ground, even with the VIP access tickets, because FFPC is a 501(c)(3), a charity recognized by the IRS.


"This can be done in a right way, in a legal way, but you never know with this administration and how high the stakes are -- it may quickly go to the other side of the line," he added.

The trip to Florida will also be the latest in a series of domestic visits that have sparked fierce criticism, especially from Democratic lawmakers, and equally fiery defenses from Pompeo.

"Dear Coastal Elites in the Media," he tweeted about an opinion piece from his personal Twitter account in July after a visit to swing state Iowa, "You don't write articles like this when I travel to NYC, Boston or Philly. Do you think America's Heartland isn't worth my time? Because I do. There's a lot of the country that exists outside the Acela corridor -- you should visit it sometime."

But Democratic lawmakers, former officials and some within the agency have criticized his choice of states as political campaigning -- visiting Iowa in July, Texas and Wisconsin in September and now Florida in October.