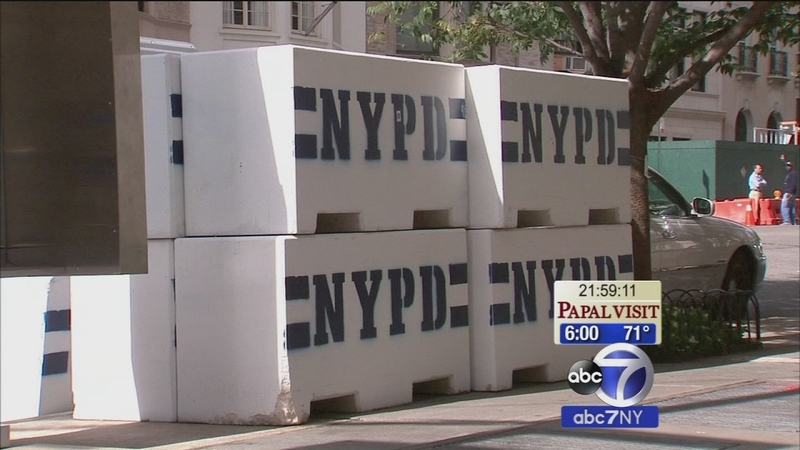 NYPD starting to put up barricades for Pope Francis' visit

EAST SIDE (WABC) -- Pope Francis is spending his final full day in Cuba before heading to Washington Tuesday and then on to New York City, and heavy security is already in place in the Big Apple.

Police Commissioner William Bratton offered an all-encompassing rundown of what to expect during the visit, including the pope's visit to the United Nations on Friday. He will be the fifth pope to visit the UN and the fourth to speak there, meeting first with the secretary general and his family before addressing the staff of about 400 people and then the General Assembly.

At St. Patrick's Cathedral, where the pope will hold prayer service Thursday, there are still no visible signs of added security. But that is not the case at the Papal Nuncio on the Upper East Side, where he'll be staying during his visit. Huge multi-ton concrete barriers and vehicle barricades are being put in place. The townhouse will be as protected as the White House, and Mayor Bill de Blasio says the city is ready.

If there is any nervousness about security, de Blasio wasn't showing it. And neither was Bratton, who says there is no credible threat against the pope.

He was also asked if the unprecedented amount of resources going into protecting the pontiff will leave some recently crime-plagued precincts with fewer patrols. 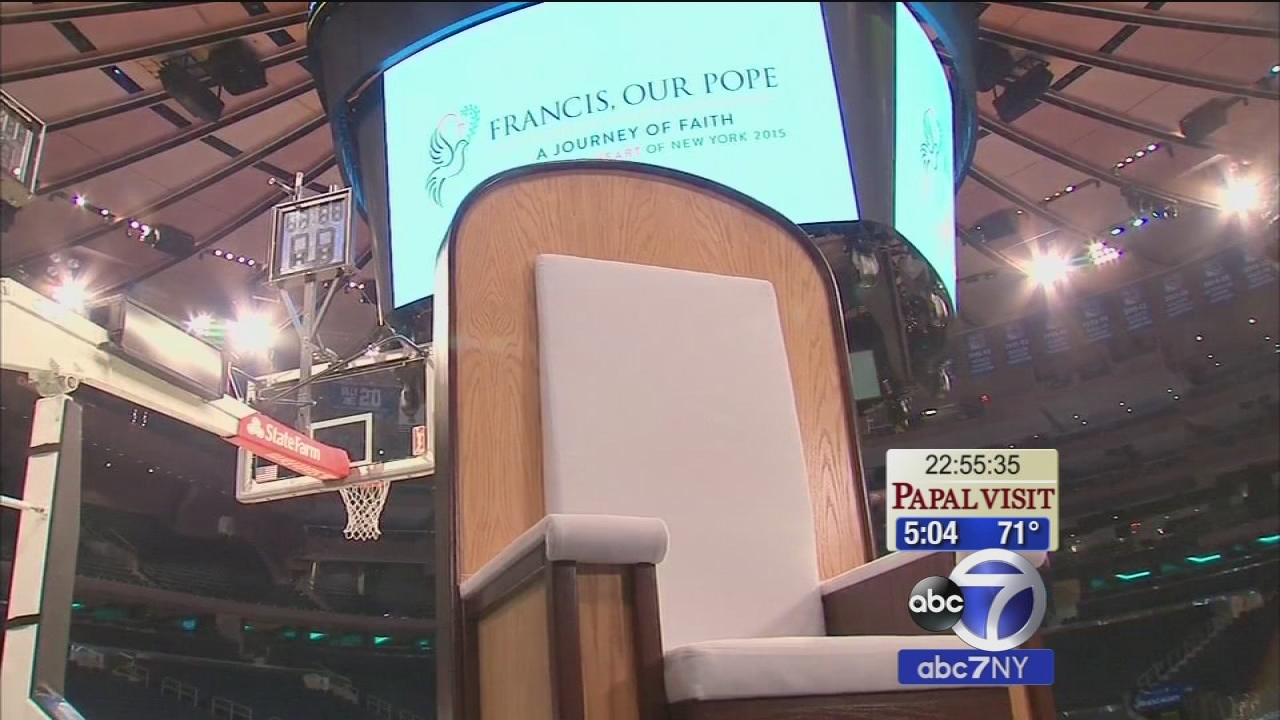 "We are a very large department," he said. "There are 35,000 of us. The pope's visit will not interfere with any of the coverage that we have in our various precincts."

While only in the city for about 40 hours, the pope will be on the move from the World Trade Center Museum and Memorial to a Catholic school in East Harlem, followed by a 12-block ride through Central Park in the open-air Popemobile. At any time, Pope Francis could go off script by crossing security barriers and wading into a sea of people.

"So whatever he chooses to do, we will do our very best to accommodate and protect him throughout," de Blasio said. "No one is nervous, everyone is focused, no one is underestimating. But there is tremendous can-do attitude in the Secret Service, NYPD."

"A couple things; obviously there are a lot of last-minute details," he said. "So today, tomorrow, I'm just going to go around and make sure everything is OK. I have a couple of rehearsals myself, for some of the Masses, the Vespers, at St. Patrick's Cathedral, the prayer and the worship. I want to make sure we have everything right."

Concrete blocks have already been dropped off along 6th Avenue and will eventually be move into the streets to stop traffic from heading to St. Patrick's. Once Pope Francis arrives, there will be a massive amount of security -- both visible and behind the scenes.

De Blasio said the city will do the best to accommodate Pope Francis' spontaneity and that drivers should expect traffic tie-ups late Thursday and all day Friday. But he added that New Yorkers can deal with the hassle and should take the subways or walk, or work at home if possible.

"The security preps are absolutely outstanding," he said. "I feel very good about where we stand right now."

He added that residents "should have faith in the NYPD."

As Catholics prepare their hearts and minds to greet Pope Francis, there is a whole universe of security working to make sure nothing happens to the head of the Catholic Church as he blesses New York City.

At one of the eight main security command centers, experts will be monitoring some 8,000 cameras posted throughout the city. The cameras will always be on and always recording.

The NYPD, the Secret Service and the FBI are all working together on the security effort, not only for the pope but also the other world leaders who will be in New York City for the United Nations 70th anniversary.

Bratton told ABC's George Stephanopoulos that the key to making this security assignment successful is having all the various city, state and federal agencies working together, and not in competition.

"Any entity in the public safety sphere that has anything to do with the U.N. 70 or the pope's visit, they will have a representative or multiple representatives in this room," Bratton said. "So we have face-to-face collaboration, but also, as you might appreciate, the computer systems that run all of this are pretty immense in their own right."

With that, Cardinal Dolan says the pope need not worry about his safety nor the safety of his followers but can focus on deeper reason for his visit.

"He's going to talk about God, Jesus, grace, mercy, love, forgiveness," he said. "What the church has been saying since millennia, but in such a fresh and sincere way."

As a point of reassurance, Bratton said that as of now, there are no specific threats. But his greatest fear are lone wolves who operate under the radar.
Related topics:
religion & spiritualityworld meeting of families 2015pope francispope
Copyright © 2021 WABC-TV. All Rights Reserved.
WORLD MEETING OF FAMILIES 2015
Check the list of NYC street closures for the General Assembly session
Pope Francis blesses boy in wheelchair upon arrival in Philadelphia
Pope Francis back in Rome after wrapping up US visit with huge open-air Mass
Pope Francis stops to bless Knotted Grotto during papal parade
TOP STORIES
Teen arrested in elevator shooting after 10 months on the run
Remarks directed at Arab American student shock NJ high school
Arrest made in murder, robbery of food deliveryman
Man attacks 11-year-old girl, hits boy in park near NYC school
Peter Scolari, 'Bosom Buddies' and 'Newhart' star, dies at 66
Phantom of the Opera makes triumphant return on Broadway
NYC mayor race, and the latest on Biden's infrastructure bill
Show More
Warrant: Baldwin didn't know weapon contained live round
Colleagues mourn cinematographer killed in prop-gun incident
Prop guns: What they are and how they can kill
NYC mayoral candidates back on campaign trail after fiery debate
NYC mayor's race: How to vote early
More TOP STORIES News