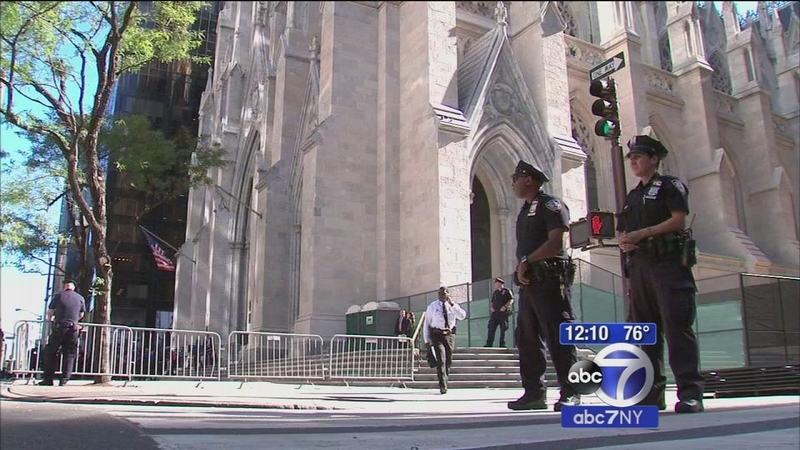 Tight security in place for arrival of Pope Francis

EAST SIDE (WABC) -- The massive security apparatus protecting Pope Francis on his trip to the United States is being tested further Thursday.

In New York, security screening will be just part of "layers and layers and layers of protection" the pope will receive during his visit, including a deployment of 6,000 extra police officers and specialized counterterrorism units, said John Miller, the NYPD's top security official.

Drivers: 6AM streets in vicinity of St. Patrick’s Cathedral will be re-opened to vehicular traffic until 10AM including 5th Ave @ABC7NY

Police will also be "looking for, in the Boston Marathon example, where is the potential terrorist threat, not to the protectee, but to the crowd. And we have layers behind that," Miller said.

The huge security apparatus will be put to the test for the first time this evening when it's expected that the Pope will ride in the open air popemobile down Fifth Avenue from around 56th Street to St Patrick's Cathedral. The entire area already in a very visible lockdown.

Hundreds of police officers and federal agents took up positions outside St. Patrick's Cathedral on Fifth Avenue Thursday morning, more than six hours before Pope Francis was expected to arrive in Midtown, as Cardinal Timothy Dolan left his residence to supervise the last minute preparations.

Nearly all the pope's movements have been scripted well in advance and Secret Service agents are prepared for his inevitable spontaneous decisions to get closer to crowds along parade routes or outside other events in Washington, New York and Philadelphia, said Arnette Heintze, a retired senior Secret Service agent who worked on protection details for Presidents Bill Clinton and George H.W. Bush.

The Vatican spokesman, the Rev. Federico Lombardi, said that despite the tight security, Francis "intends to move around as he usually does."

Agents "adapt and work to accommodate the needs and issues" of whomever they are protecting, whether they are political candidates wandering along a rope line or a pope who likes to mingle with fans, Heintze said.

Planning for Francis' visit has been in the works for nearly one year and included at least one visit to Rome by Secret Service Director Joseph Clancy and two senior agents assigned to the protection details.

Sources have told us that in the remaining hours before the Pope arrives in New York, the FBI, Secret Service and NYPD are throwing all their counterterrorism resources toward tracking down any potential threats.

"They are tasking their confidential informants to go out and be the eyes and ears if you will of the joint terrorist task force to try to ascertain if there is any viable threat out there against the Pope that they need react to before the Pope arrives," said Manny Gomez, former FBI agent.

Those negotiations have had wildly different results on the ground, at least to onlookers: In Rio de Janeiro in 2013, on Francis' first foreign trip, his car was mobbed by the crowd after the driver took a wrong turn off the motorcade route and got stuck in traffic. Rather than recoil in fear, Francis rolled down the window to high-five the crowd. He freely waded into crowds along Copacabana beach, and even sipped mate - a South American tea - handed up to him from well-wishers.

Many of the pope's most devout followers in the New York area will not be able to even catch a glimpse of Francis. 87-year old Josephine Oscco came all the way from Guttenberg, N. J. to watch from Fifth Avenue, only to find an eight-foot metal fence, and a sign saying she couldn't stand there.

87 year-old Josephine Oscco in tears after she learned she needed a special ticket to see the #PopeFrancis motorcade. pic.twitter.com/e3OuOX5LIB

She begged officers to let her stay and was told she couldn't stand anywhere near the cathedral. "It's not fair, it's not fair," she said. "Papa is coming to see the people and people want to see papa, papa brings hope and he can't touch the people here."

"How does it make you feel?", we asked Queens resident Berta Moran. "It makes you feel sad because I want to see my pope," she said. "He like the contact with the people, he like that. It's like a jail, like we are in jail and no see the people."