Port Authority cracking down on illegal pickups at NYC airports 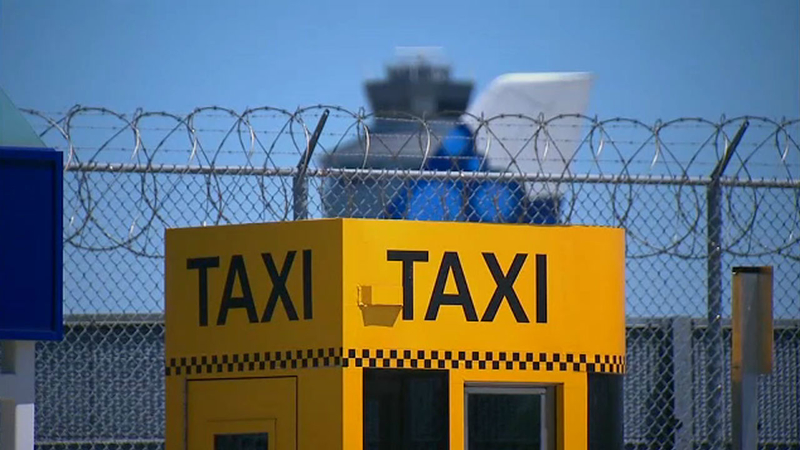 Port Authority cracking down on illegal pickups at NYC airports

NEW YORK (WABC) -- Authorities are cracking down on illegal rides at local airports to keep passengers and drivers safe.

Unlicensed livery cab driver Marco Morales-Carrillo, 32, was chased by cops through Terminal B on Tuesday night before launching off the second-floor departure ramp onto a car below. He smashed the roof of a car below and seriously hurt his head before rolling onto the street and hobbling into a nearby SUV driven by his wife, police said.

They were nabbed not too far from the scene after becoming snarled in airport traffic.

Police say this is the fourth time he has been arrested after allegedly trolling for fares at city airports.

"A lot of these people have steerers where they come into the baggage claim area," Port Authority officer Charles O'Connor said. "They're approaching passengers unknowingly many times saying 'do you need a ride?' when the Port Authority provides safe, secure locations for customer pickups."

Police are working with the Queens district attorney to increase fines and get stiffer penalties to deter these activities because unsuspecting passengers often get taken advantage of.

"We don't know when an illegal cab picks up one of our passengers, whether they have a driver's license, whether they're insured or pretty much anything," O'Connor said.

Travelers and Yellow Cab drivers at LaGuardia said they were on board with the crackdown.

"If you come here from different countries or other parts of the country, you don't know how much cabs cost and you find out later on you got ripped off five times more than what you should have paid, that amounts to stealing," one traveler said.

Morales-Carrillo was slapped with a slew of charges including reckless endangerment, resisting arrest and unlawful solicitation at a transportation facility.

Cops say his wife had an open container of alcohol in the vehicle.