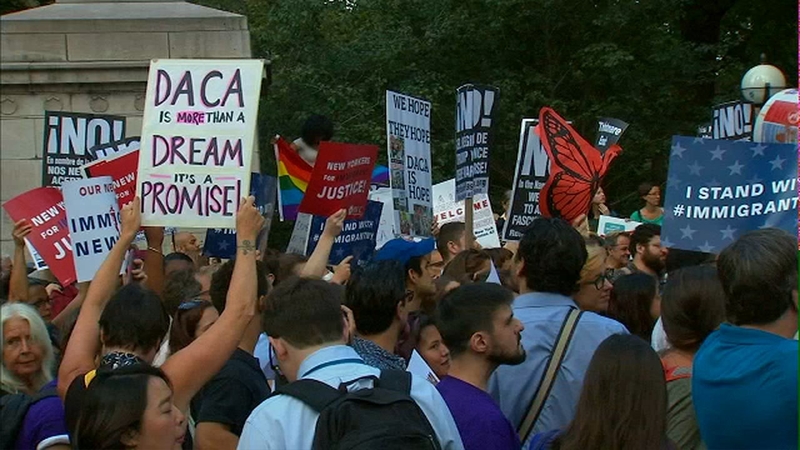 Organizers say the protesters came together for a mass march to insist on dignity and justice for immigrant communities.

Advocates on both sides of the issue are bracing for the possibility that Trump will halt the issuance of new work permits under DACA, a move that would effectively phase out a program that gave hundreds of thousands of young people a reprieve from deportation and the ability to work legally in the U.S.

The Trump administration faces a September 5 deadline from a group of Republican state lawmakers hoping to force the president's hand. The White House, however, insisted Sunday that it had no announcement on an issue the president has openly wrestled with for months.

The deliberations come as Trump has been under fire for his response to a white supremacists' protest in Charlottesville, Virginia. Trump further fanned the flames of racial tension Friday when he pardoned Joe Arpaio, the former sheriff of Arizona's Maricopa County, who had been found guilty of defying a judge's order to stop racially profiling Latinos. The decision drew fury from Democrats and opposition from some Republicans, but was hailed by Trump's most fervent base.

Trump has wavered back and forth on his plans for DACA, which he slammed during his campaign as "illegal amnesty." Since taking office, however, Trump has softened his stance on the issue, at one point telling The Associated Press that the affected young immigrants could "rest easy."

His administration, Trump said back in April, was "not after the dreamers, we are after the criminals." All the while, the Department of Homeland Security has continued to grant two-year, renewable DACA work permits, to the dismay of immigration hard-liners.

But now, Trump is under pressure to make a final call: His administration is facing a September 5 deadline set by a group of Republican state lawmakers, led by Texas Attorney General Ken Paxton. The group, which successfully halted an Obama-era program that would have protected certain parents living in the country illegally, threatened to take on DACA if the administration does not rescind the order and stop issuing work permits by their deadline.

"It's forced him," said Roy Beck, the executive director of NumbersUSA, which advocates for lower immigration. "Inertia's great until something gets in your way and you have to either rev up the engines to go through the barrier or just stop."

Continuing to process work permits is one thing; defending a program Trump called illegal in court is another. And many, including Trump's chief of staff John Kelly, the former head of DHS, believe that DACA is on dubious legal footing and would not stand up in court.

The president has several options.

He could order DHS to halt the issuance of new DACA work permits immediately - or at a future date - and perhaps call on Congress to come up with a legislative fix, as, Kelly has in the past. There have been conversations among lawmakers about ways to grandfather current DACA recipients, and such a measure could become part of the horse-trading over the budget and raising the debt ceiling when Congress returns from August recess.

The administration could also continue issuing DACA work permits, trigging the Republican court challenge, and then choose not to defend the measure in court.

Mark Krikorian, the executive director of the anti-immigration group Center for Immigration Studies, which also advocates a reduction in immigration, said that he is in favor of allowing the affected immigrants to stay, but believes the administration should use their imperiled status as a bargaining tool to push other priorities, like new limits on legal immigration.

"My fear is, and always has been, is that they're going to give away DACA for peanuts," he said, pointing to a deal that would only secure funding for Trump's promised southern border wall in exchange for some sort of legal status for those covered by DACA.

"That's the only bargaining chip they really have with the Democrats," he said.

Meanwhile, those who are impacted by the program have been preparing for the worst, said Sergio Garcia, an immigration attorney in California who has handled thousands of DACA applications

There's "a lot of anxiety. A lot of people nervous, trying to figure out what's next and what's going to happen to them," he said, pointing to Trump's Arpaio decision as a troubling sign.

"Every time we think there's a line this president won't cross, he's crossing it," Garcia said.