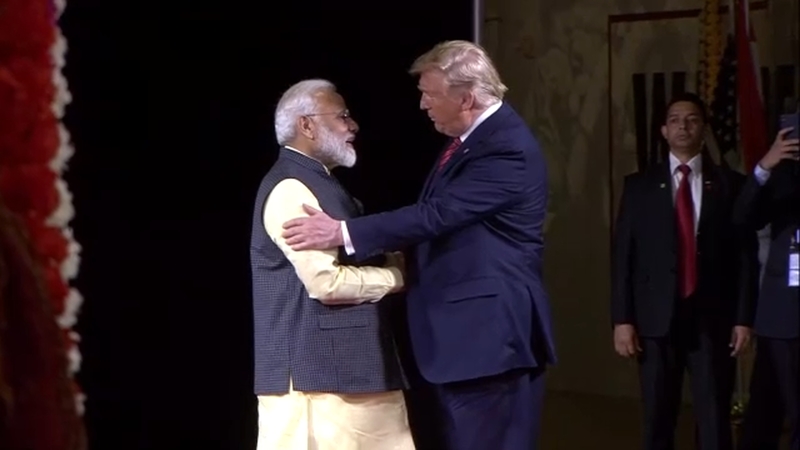 HOUSTON, Texas -- NRG Stadium will be packed this Sunday, but not for a football game. Instead it's a rally hosting the prime minister of India for an event called "Howdy, Modi!"

Fifty thousand people inside NRG, all of them there to see the Prime Minister of India, Narendra Modi.

"We wanted to give him a Texas-sized welcome," said event chair Jugal Malani.

Looking forward to a wide range of programmes in this dynamic and energetic city today and tomorrow. pic.twitter.com/JxzWtuaK5x

"Howdy, Modi, as you know, is Texas slang, saying 'How are you doing?' and one of our, I think someone said in the meeting, said "Howdy, Modi!" and everyone liked it "

Organizers told Eyewitness News there's a waiting list of 5,000, and that people are coming from 48 states.

Two hundred people are on the organizing committee alone. Another 1,100 are volunteering at the event. The event is free and completely organized by the community.

"At the get go, we knew this was going to be moving fast because he's an extremely popular leader in the Indian Diaspora," said event spokesperson Gitesh Desai.

Sunday, we learned President Donald Trump will be joining Modi at NRG, both of them on stage during the three-hour mid-morning event.

Houston-India trade is worth more than $7 billion annually. Dozens of companies have a presence in Houston and in India.

"It's going to be amazing because Prime Minister Modi is an icon," said Swapan Dhairyawan, president of the Indo-American Chamber of Commerce. "He's an icon. And we are so excited to welcome him to H-town and Houston being the hub of oil and gas."

AMONG FRIENDS: Abbott explores close ties between Texas and Mumbai

The Indo-American Chamber of Commerce is excited about what this event might mean for future opportunities.

"The historic fact that President Trump will be joining the prime minister on the stage in Houston will lead to much more business," chamber executive director Jagdip Ahluwalia said.

Not everyone is excited however. The group Sikhs For Justice is organizing a protest.

Over the weekend, they ran trucks along Houston's freeways. On Sunday, they estimate as many as 20,000 will be outside the event, not protesting President Trump, but rather the prime minister for what they call human rights violations, both religious and territorial.

"Political leaders like Narendra Modi have no place in the United States, which stands for the right for life, liberty, and property of every citizen in the world," said Gurpatwant Singh Pannun.