President Trump says he has interviewed 4 candidates for Supreme Court 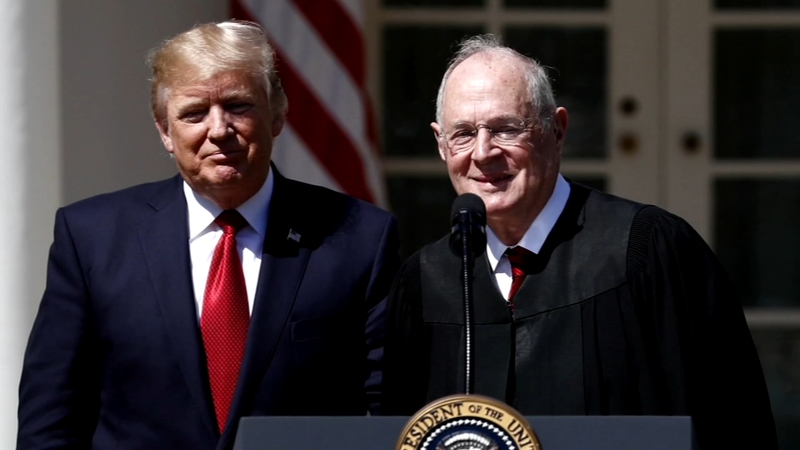 Eager to build suspense, Trump wouldn't divulge who he's talking to in advance of his big announcement, set for July 9. But he promised that "they are outstanding people. They are really incredible people in so many different ways, academically and in every other way. I had a very, very interesting morning."

Spokeswoman Sarah Huckabee Sanders said Trump met with four people for 45 minutes each on Monday and will continue meetings through the rest of the week.

The president spent the weekend at his Bedminster golf club, consulting with advisers, including White House counsel Don McGahn, as he considers his options to fill the vacancy with a justice who has the potential to be part of precedent-shattering court decisions on abortion, health care, gay marriage and other issues.

McGahn will lead the overall selection and confirmation process, the White House said Monday, repeating the role he played in the successful confirmation of Justice Neil Gorsuch last year.

McGahn will be supported by a White House team that includes spokesman Raj Shah, taking a leave from the press office to work full time on "communications, strategy and messaging coordination with Capitol Hill allies." Justin Clark, director of the Office of Public Liaison, will oversee White House coordination with outside groups.

Trump's push came as the Senate's top Democrat tried to rally public opposition to any Supreme Court pick who would oppose abortion rights. Senate Minority Leader Chuck Schumer issued a campaign-season call to action for voters to prevent such a nominee by putting "pressure on the Senate," which confirms judicial nominees.

With Trump committed to picking from a list of 25 potential nominees that he compiled with guidance from conservatives, Schumer said any of them would be "virtually certain" to favor overturning Roe v. Wade, the 1973 case that affirmed women's right to abortion. They would also be "very likely" to back weakening President Barack Obama's 2010 law that expanded health care coverage to millions of Americans, he said.

Schumer said that while Democrats don't control the Senate - Republicans have a 51-49 edge - most senators back abortion rights. In an unusually direct appeal to voters, he said that to block "an ideological nominee," people should "tell your senators" to oppose anyone from Trump's list.

"It will not happen on its own," the New Yorker wrote in an opinion column in Monday's New York Times. "It requires the public's focus on these issues, and its pressure on the Senate."

Schumer's column appeared a day after Sen. Susan Collins, R-Maine, said she would oppose any nominee she believed would overturn Roe v. Wade. Collins, who appeared on ABC's "This Week" and CNN's "State of the Union," said she would only back a judge who would show respect for settled law such as the Roe decision, which has long been anathema to conservatives.

Senate Majority Leader Mitch McConnell told reporters in Ashland, Kentucky, on Monday that "it's probably going to be close; I think there will be a big national, campaign rage. But in the end, I'm confident we'll get the judge confirmed."

During his 2016 campaign and presidency, Trump has embraced anti-abortion groups and vowed to appoint federal judges who will favor efforts to roll back abortion rights. But he told reporters on Friday that he would not question potential high-court nominees about their views on abortion, saying it was "inappropriate to discuss."

Without Kennedy, the high court will have four justices picked by Democratic presidents and four picked by Republicans, giving Trump the chance to shift the ideological balance toward conservatives for years to come. Both Chief Justice John Roberts and Gorsuch, Trump's first pick to the high court, have indicated more broadly that they respect legal precedent.

Trump has said he is focusing on up to seven potential candidates, including two women, to fill the vacancy being left by Kennedy, a swing vote on the nine-member court.

Currently the court has three women justices, all appointed by Democrats. Court watchers have been discussing the prospect of a conservative woman on the bench.

Carrie Severino, chief counsel and policy director of the Judicial Crisis Network, said she did not think picking a woman was "the top concern" of Trump, stressing judicial philosophy and experience. But she added: "If he does end up nominating a woman, she can stand on her own accomplishments."

Anna Chu, vice president for strategy and policy at the National Women's Law Center, said she was concerned that a female pick could be a kind of "Trojan horse."

"What's important in addition to increasing diversity is how that person would actually interpret law," Chu said. "There are real stakes here. You could be a woman and not be fair minded."