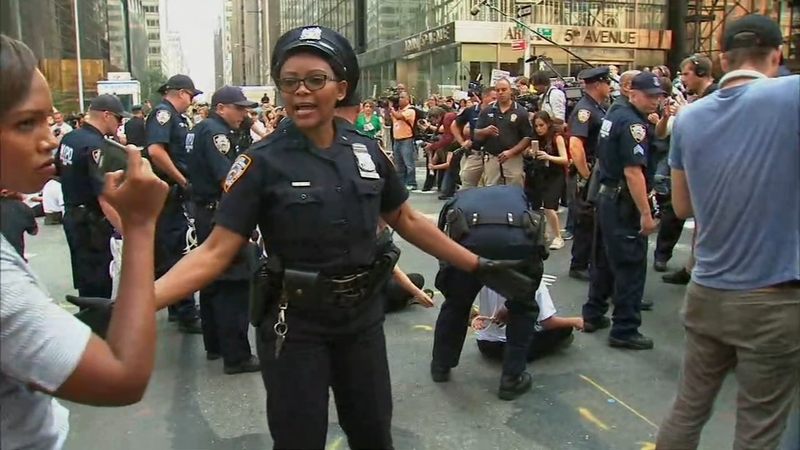 The protesters gathered at 56th Street and Fifth Avenue in front of President Trump's home at about 11 a.m.

Just before noon, approximately 12 of the protesters decided to sit down in the middle of Fifth Avenue as a part of an organized effort. When officers asked them to move, they refused and were arrested.

The NYPD confirmed 12 arrests were made at that time. All were transported to a downtown precinct for processing.

But then another sit-in happened about two hours later, blocking traffic at the intersection of Fifth Avenue and 57th Street.

People on the sidelines chanted and waved signs. They yelled "undocumented - unafraid."

Twenty-two people were arrested in that second sit-in. Police say as long as they give their names and dates of birth, they won't be fingerprinted.

No injuries to protesters or officers were reported in either incident.

DACA protects those brought into the country illegally as children, and Attorney General Jeff Sessions announced -- at the the same time of the protest in NYC -- that the Trump administration is doing away with the protections.

Other protests are expected across the country. Supporters of the program took to the streets Monday in Las Vegas, Los Angeles, South Carolina and elsewhere, holding up signs that read, "No person has the right to rain on your dreams" and "You may say I'm a dreamer but I'm not the only one."
Iribe and her partner are planning on giving one of her son's grandparents power of attorney in case they are deported without notice. She is considering getting her son dual citizenship so he could join them in Mexico if needed.

Iribe said her family also will need to figure out how to pay for a mortgage on a home they bought two months ago.

"For us, it's more like how will we protect ourselves from deportation, and two, how will we make it work for our family, financially," Iribe said.

Abril Gallardo, 27, has used the work permit she got through DACA to get a job as a communications director for a Phoenix advocacy group. That's allowed her to pay for college so far, although cutting off in her ability to work legally threatens that.

If she can't work anymore, Gallardo plans on helping with her mom's catering business and hopes to start their own family restaurant one day.

"The most important thing is that we're safe together, and we're there for each other," Gallardo said.
Evelin Salgado, 23, who came from Mexico 13 years ago, is worried about losing her job, her home and her driver's license if DACA is canceled.

"It's like my life is crumbling on top of me," said Salgado, who graduated from Murray State University in Kentucky last year and is in her second year as a high school Spanish teacher just outside Nashville, Tennessee.

"My hopes. My dreams. My aspirations. Everything my parents and I have worked so hard for. We don't know what's going to happen," she said.

Salgado and her parents rent a home and she helps them financially. They may be forced to move to a smaller home or an apartment "because if I lose my job, of course, we can't pay for it."

Her father works in landscaping and her mother washes dishes at a restaurant. That's what got Salgado through college.