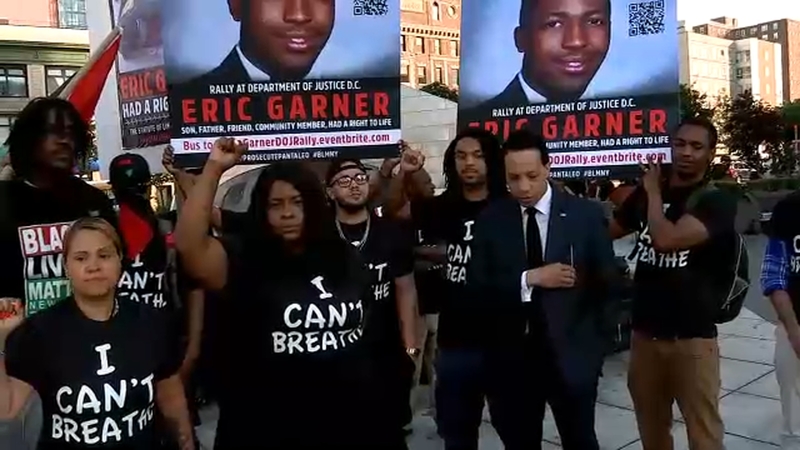 HARLEM, Manhattan (WABC) -- The clock is ticking for the Justice Department to file charges in the chokehold death of Eric Garner, and on Monday, a rally is being held in the nation's capital to urge the feds to make a move ahead of Wednesday's deadline.

"We don't have faith in our system anymore," protester Shawn Godbolt said. "It's broken. Something's wrong. There's no way everyone is dying by accident."

Video of Garner in a chokehold sparked outrage and conversation across the country, but the officer involved was never criminally charged.

Daniel Pantaleo could still get fired pending the outcome of last month's internal NYPD administrative trial, but a Staten Island grand jury decided not to indict him.

Now it's up to the U.S. Justice Department. They have until Wednesday when the five-year statute of limitation expires.

It was July 17, 2014, when Garner was arrested on suspicion of selling loose cigarettes outside a Staten Island deli.

When Pantaleo placed him in a chokehold, Garner told him, "I can't breathe."

A medical examiner ruled the death a homicide.

Monday morning, protesters boarded a bus to D.C. The protest is being held outside the Justice Department around noon, demanding Pantaleo be criminally charged.

"When someone is put in a chokehold and they cannot breathe and police officers are being made aware of that and they continue to do this, it is something that has to be looked at," protester Richard Hernandez said. "The grand jury fell short as far as I'm concerned."

It is widely expected that will not happen, and demonstrators said they are ready if that proves true.

The Reverend Al Sharpton is also expected to attend the protest.