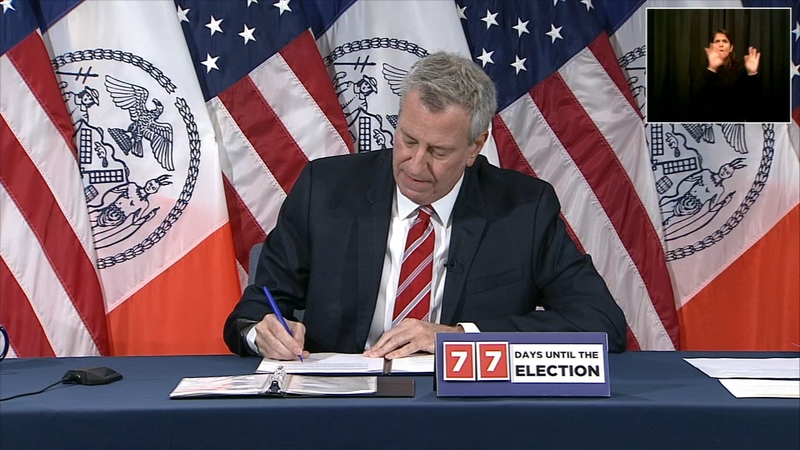 The mayor said he is urging New Yorkers to avoid traveling to states with high infection rates.

"I understand that for some people, there's an emergency situation, a family crisis or something they have to do for business, and they don't have a choice," de Blasio said. "But I just want to urge people that if you have a choice, if you're going to travel, go to a place that's not on the New York State list of states that are experiencing profound coronavirus problems. If you have a choice in travel, don't go to where the problem is."

He added fines will be issued starting this week for those who refuse to comply.

"This is going to be now a rule here in New York City, because we have to get serious about the fact that there's a real danger here," de Blasio said. "We have to confront it we have the right tool to confront it, which is the quarantine but now people have to take that seriously, so this executive order would be another step to make clear to everyone how serious it is.

Lakewood party busted
Police in New Jersey broke up a large party over the weekend as officers work to enforce the executive order in place to slow the spread of the coronavirus.

A large number of people were inside a Estreia Restaurant for a formal event on Route 9, despite the fact that the restaurant had tents set up outside. Gov. Phil Murphy said he was sorry to say the state is still "not there yet" on indoor dining "but trying like heck to get there."
EMBED More News Videos

Police in New Jersey broke up a large party over the weekend as officers work to enforce the executive order in place to slow the spread of the coronavirus.

MSU asks students to stay home
Officials at Michigan State University announced a chance of fall semester plans and are asking undergraduate students who planned to live in residence halls this fall to stay home and continue their education with MSU remotely.

The school says while a vast majority of classes were already offered in remote formats, it will work the next two weeks to transition those that were in-person or hybrid to remote formats.

Changes for students at Notre Dame
Notre Dame announced it is moving undergrad classes online for two weeks, but will still allow students to remain in dorms.

The university is encouraging students that live off-campus to remain in their residences and not come to campus during the two-week period.

MTA front-door boarding returns
MTA bus riders can return to boarding through the front door and paying the fare on Monday, Aug. 31. Officials say this is a crucial step in supporting the reopening of NYC.

In March, the transit authority had passengers only use the back door to prevent the spread of COVID-19. Sarah Feinberg, the MTA president, says buses have lost $431 million in revenue since March.

2 more states added to Tri-State Travel Advisory
New York, New Jersey and Connecticut have added two states back to the list of areas from which travelers are required to quarantine for 14 days. Alaska, which was removed last week, and Delaware, which has been added and removed several times, are back on the Tri-State Travel Advisory, which now stands at 33 states and two territories.

Change of plans
Ithaca College in New York announced it will be switching to online learning after releasing a hybrid reopening plan last week. Students were to start returning to campus August 28 with others returning in waves throughout September for an October 5th start with a combination of remote and in-person learning. President Shirley M. Collado said her decision was based on the realization that the campus experience would have been less than ideal and, "It is easy to foresee the likelihood of a public health trajectory that would mandate the closure of the college due to circumstances beyond our control. Bringing students here, only to send them back home, would cause unnecessary disruption in the continuity of their academic experience." Ithaca Voice said the reopening plan included testing for staff that began on August 14.

NYC gyms update
Mayor de Blasio said Tuesday he doesn't think New York City gyms will start before September 2. He said the priority is going to be the inspections. The mayor emphasized that health and safety come first. "We will make the decision, because one thing that the governor's executive order -- we are waiting to see of course the final wording -- but what was put out in the press release certainly makes clear local discretion in all of this. We are going to move those inspections as quickly as we can, but i want to be real clear the priority, especially given the proximity of September 2 to September 10, the priority is going to be the inspections we need to do for child care centers and schools. We are going to work through how to balance that, but there is no question in my mind, most important thing we could do with our health inspectors is focus on child care centers and schools."

Looking for a staycation? NYC offers many options
This summer has been like no other, and for those who don't want to travel, there are some intriguing staycation options.

'Miracle' COVID patient goes home after 111 days
A "miracle" COVID-19 patient who cheated death multiple times went home Monday after 111 days at Long Island hospitals to an ovation from doctors, nurses and staff members. Tito Velasquez, 36, of Valley Stream, had no underlying health conditions when he arrived at Long Island Jewish Valley Stream Hospital in critical condition back on April 28. Doctors said his oxygen saturation, which is 99% in a normal patient, was at just 11%. He was immediately placed on a ventilator and later tested positive for the novel coronavirus.