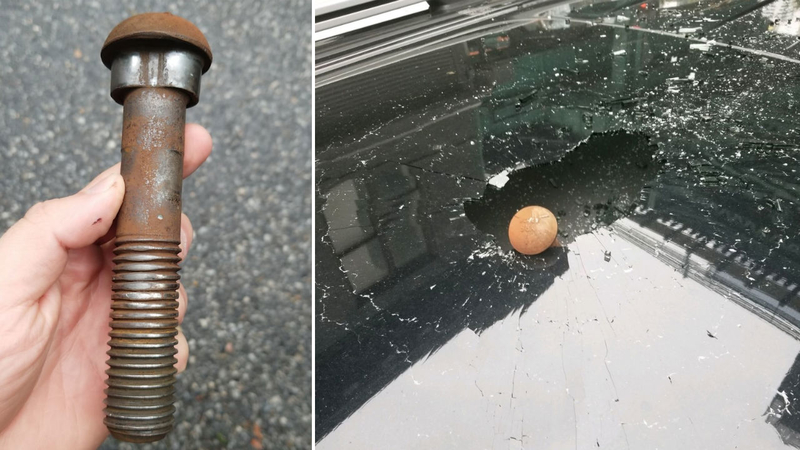 QUEENS, New York (WABC) -- A man who lives in New York City says his car was struck by a giant rusty bolt Tuesday morning in Queens.

31-year-old Philip Garcia said he had just dropped off his daughter at school in Manhattan and was heading back to Queens around 8 a.m. when the bolt fell on his car from the elevated train tracks above, shattering his sun roof and startling him.

"Didn't need coffee to wake up this morning, it was definitely a shock and quite a fright," said Garcia.

The incident happened as he got off the Queensboro Bridge and passed under the N/W line train tracks near Queens Boulevard and 27th Street.

Garcia was the only person in the car at the time and was not injured. He said he found some shards of glass near his daughter's car seat.

"Something like this shouldn't be happening," said Garcia. "We pay so much in MTA fare hikes and toll hikes and our infrastructure's still the same."

A spokesperson with the MTA released the following statement:

"The MTA's first priority is the safety of New Yorkers. There are protective measures strategically placed underneath tracks on elevated lines throughout the system, including at the location of today's debris on the N-W line south of Queensboro Plaza. Metal containers like the ones at that section of the N-W line are specifically designed to catch bolts at rail joints such as the one that fell today. We are investigating how and why the bolt came loose and was not caught by the system as designed. This section of track was last inspected October 17."

Thsi year alone, there have been at least half a dozen accidents in which debris fell from elevated tracks, mostly along the 7 line.

The MTA said it has a safety net in place to catch falling construction pieces.