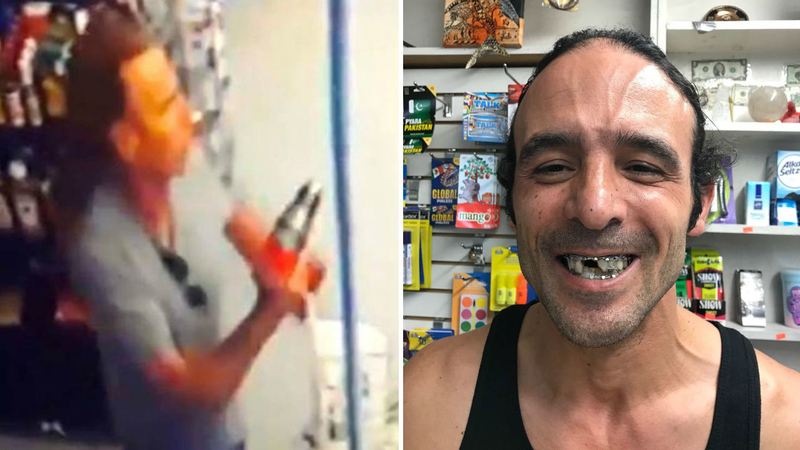 ASTORIA, Queens (WABC) -- Police in Queens are searching for a man known as Frederico after he allegedly attacked the owner of a deli and struck him in the face with a power drill.

The incident happened on Monday, June 22, inside 41st Grocery Store on 30th Avenue and 41st Street in Astoria.

Authorities say a known individual who frequents the commercial establishment engaged in a verbal dispute with the store owner's girlfriend, an employee at the deli.

The 44-year-old owner intervened and tried to stop the dispute.

"I went back like this, then I ran after him," said Dennis Maddocks, who just opened the store four months ago.

He says he knows the attacker and hired him to do some repair work.

"You think you know people but maybe you really don't, and I don't know him for very long," said Maddocks.

Everything changed the evening of June 22nd just after 7 p.m. inside the store. The owner's girlfriend got into a shouting match with Frederico.

But he wanted one more thing. "He's asking where's my screw gun because he left a power tool here," Dennis said.

The store's security camera was rolling.

"My girl starts yelling at me and all of a sudden out of nowhere I got decked right in the mouth with the screw gun," Maddocks said. "I felt my tooth coming out and blood coming out."

He had been punched with a Dewalt power drill. The attacker got away, and Dennis went to the hospital.

"Upper part of my jaw broken, dislocated," he said. "Knocked out tooth, several stitches, about five or six stitches in my lip."

Dennis's recovery is expected to last three to four months. He returned to work in a few days with his jaw wired shut but his heart open, to forgiveness.

"The truth is this guy really messed himself up more than anybody else," he said. "The divine intelligence or whatever regulates what's going on out there and has a wonderful way of paying people back for doing things that they shouldn't do to other people."

Nothing was stolen in the incident.

The individual is known as Frederico and is described as a 37-year-old white or Hispanic male, approximately 5-foot-10 and 150 pounds with a medium build, blue eyes, light complexion, and long wavy blonde hair.

He was last seen wearing a gray T-shirt, sunglasses, shorts and white sneakers.