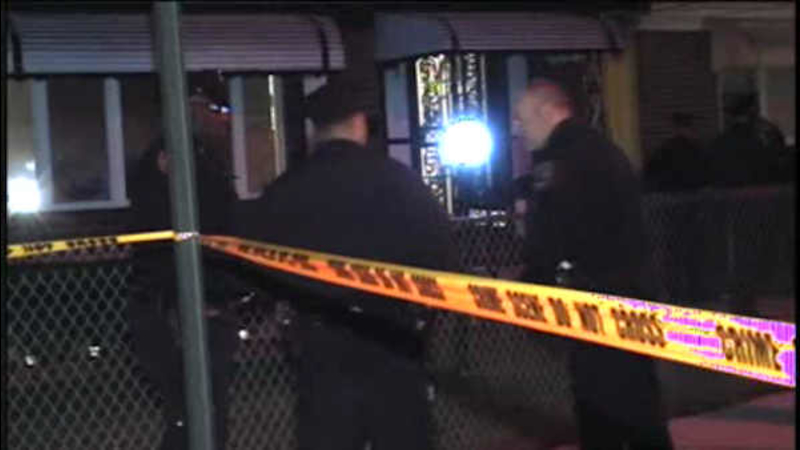 JAMAICA, Queens (WABC) -- Police are searching for suspects after a correction officer and his wife were shot in a violent home invasion in Queens Sunday night.

The off-duty New York State correction officer, 58-year-old Henry Wright, was shot five times in the torso. It is not yet clear whether he was targeted.

His 52-year-old wife, Sharon Floyd-Wright, was shot once, grazed in the shoulder.

Police say she was able to fight back, hitting one of the suspects in the head with a hammer.

Neighbors in Jamaica, Queens were rattled by what happened. It was just before 7 p.m. when there was a knock at a door on Mathias Avenue in Jamaica.

The woman who lived inside thought the knock was her neighbor, and answered the door. That's when things quickly turned violent.

CeFaan Kim has the details from Jamaica.

A struggle ensued, and the man jumped in. Then, a second suspect appeared, firing several shots. The neighbor says he watched the couple being rushed away to the hospital.

"The guy wasn't moving at all, the lady was in shock, still that it happened," said 'Shon'.

"They're good people. They talk to me. In the summer we barbecue together," says Mario Farez.

Police are looking for two men in their 20's or 30's wearing black sweatshirts and blue jeans, and possibly fleeing the scene in a dark colored vehicle.

The couple was rushed to Jamaica Medical Center, where Henry is listed in critical condition.

Department of Corrections and Community Supervision Acting Commissioner Anthony J. Annucci issued a statement: "I am shocked to learn of this horrific incident that injured one of our own correction officers. On behalf of our entire Department staff, we join with Henry's family and loved ones in wishing for a full and speedy recovery."