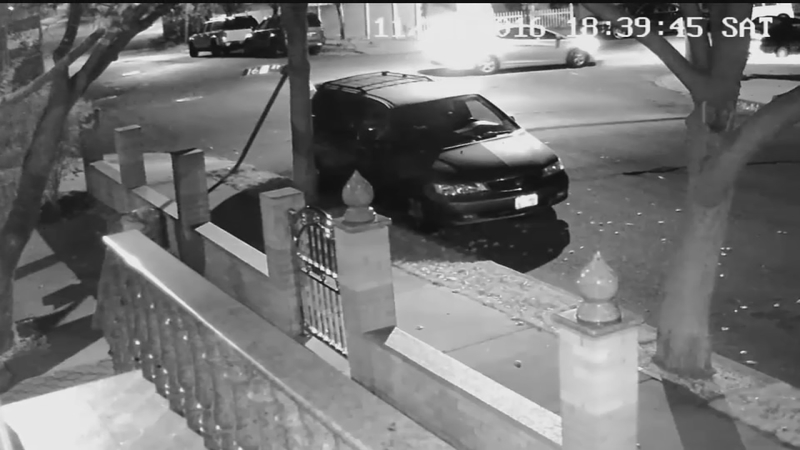 JAMAICA, Queens (WABC) -- Police have released new video in the shooting of a correction officer and his wife during a violent home invasion in Queens Sunday.

According to the New York City Police Department, investigators are looking for a light colored 2011-2015 Hyundai Elantra suspected of being the getaway car.

Police are trying to determine whether he was targeted because of his job.

His 52-year-old wife, Sharon Floyd-Wright, was shot once, grazed in the shoulder. Police said she was able to fight back, hitting one of the suspects in the head with a hammer.

Just before 7 p.m., there was a knock at a door of the Mathias Avenue home in Jamaica. The woman who lived inside thought the knock was her neighbor, and answered the door. That's when things quickly turned violent.

A struggle ensued, and a man jumped in. Then, a second suspect appeared, firing several shots.

Police are looking for two men in their 20s or 30s wearing black sweatshirts and blue jeans. The couple was rushed to Jamaica Medical Center.

Investigators say it does not appear as if anything was stolen from the home.

The New York State Correctional Officers Police Benevolent Associations announced a $25,000 reward for information leading to the arrest and conviction of the suspects.

"We are shocked at the shooting of one of our most valued members and his wife. This level of violence, especially against a law enforcement member, cannot be tolerated. We will provide whatever support is necessary to the NYPD to catch the individuals responsible for this heinous act," said Michael Powers, NYSCOPBA President.