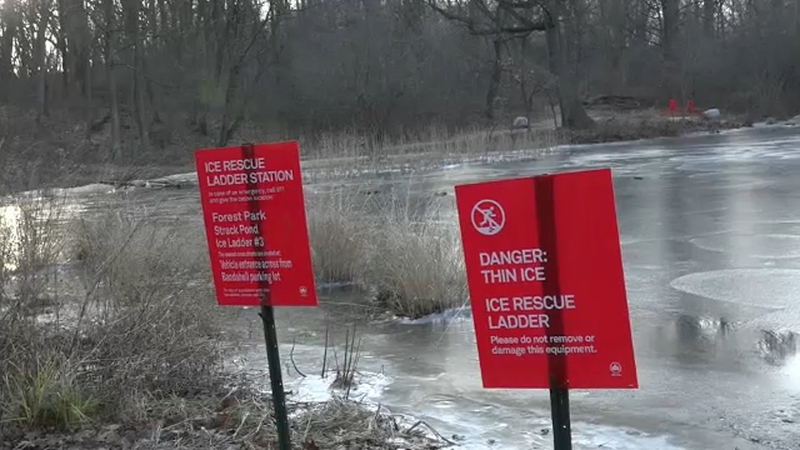 WOODHAVEN, Queens (WABC) -- Two young boys are lucky to be alive after being rescued from thin ice in Queens.

The 10 and 12-year-old boys fell through the ice at Strack Pond in Forest Park on Christmas Day.

The boys emerged in the arms of the FDNY wrapped in blankets and heavy firefighter bunker gear for warmth. A third boy pulled them to safety before the professionals could arrive.

Temperatures were in the fifties for the past few days, so the ice coating the pond was perilously thin.

Two years ago, in the exact same spot, an 11-year-old named Anthony Perez died after rescuing a friend who fell through thin ice. He saved his friend, but then plunged in himself. Firefighters in t-shirts and shorts broke through the ice with their bare hands to find him, but by the time they did, it was too late.

This time of year, looks can be deceiving. Standing water may be crusted with ice, but it is often far too thin. The Parks Department has signs posted around every body of water it controls, along with special ladders used for ice rescues.

With a second serious incident in the very spot where Perez died, officials did not respond to questions about whether they need better safety measures.

The kids involved in Wednesday's incident were treated for exposure at Jamaica Hospital and are expected to be okay.