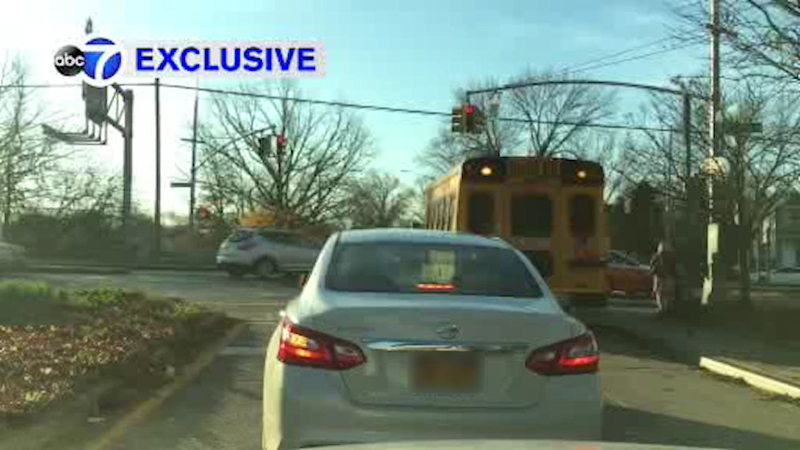 FLORAL PARK, Queens (WABC) -- Exclusive video shows a school bus filled with kids about to run a red light and cross a busy street in Queens.

The video shows that the driver waits for the right moment with the hazard signals blinking.

It slowly inches forward and then drives straight through.

The video was taken by David Friday morning around 8:20.

The Floral Park man had just dropped off his son at school, when all of a sudden at the Cross Island Parkway Service Road at Hillside Avenue, David says the bus squeezed by his vehicle on a narrow one lane road, driving up onto the curb, almost hitting his car, and cutting to the front of the line.

That's when David took out his phone and took the video.

"I knew something; you know he's going to do something bad. So it was really shocking to see that he's passing through a red signal on a busy road during the rush hour with children in it," David said.

Parents in the area are stunned.

The owner of the company says he too is appalled by this video.

He says there's no explanation for it and adds this driver will definitely be suspended.

In a statement a spokesperson for the Department of Education says, "The safety and security of students and staff is our top priority. We are looking into this serious incident and will work with the bus vendor to ensure it's addressed."

The driver will have a chance to speak at a hearing, sometime before Tuesday, but until then, that driver will not be behind the wheel.
Related topics:
new york cityschool buscellphonecaught on camera
Copyright © 2022 WABC-TV. All Rights Reserved.
TOP STORIES
How to watch 'We Belong: Pride 2022' hosted by Sam Champion
Abortion rights supporters fill the streets of cities nationwide
Astros throw combined no-hitter against the Yankees
2022 NYC Pride March: Everything to know
Planned Parenthood to kickoff NYC Pride march
Bald eagle snatches Yorkie off porch: VIDEO
AccuWeather: Another warm day
Show More
Democratic candidates for NY Governor spend weekend campaigning
Biden signs landmark gun measure, says 'lives will be saved'
Settlement would forgive $6B for defrauded college students
16-year-old shot and killed in Brooklyn
3 people found dead inside Queens home
More TOP STORIES News