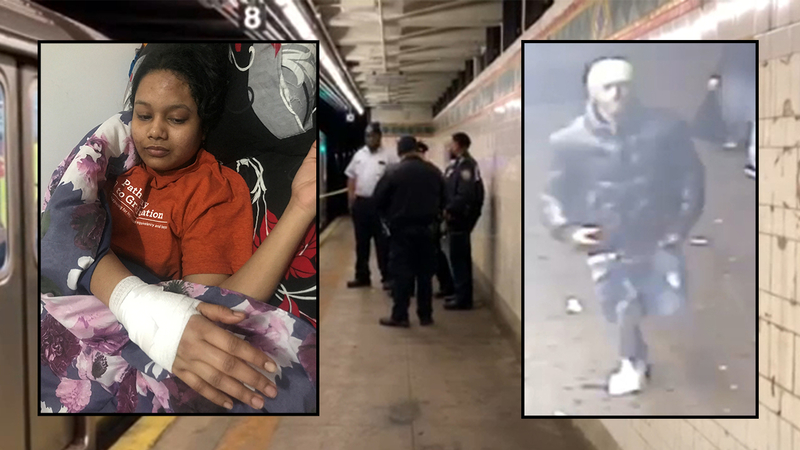 MOTT HAVEN, Bronx (WABC) -- Police in the Bronx are searching for the man who randomly slashed a young woman in the head on the subway.

Authorities say it appears the man was following the victim from one train car to another and then lunged at her in an unprovoked attack.

It happened on a northbound 6 train just before 10 p.m. Wednesday, and police released surveillance video of the man sought in the attack.
EMBED More News Videos

Police released video of the man sought in a slashing on a Bronx train.

The 23-year-old woman, Rabia Begum, tells Eyewitness News she was on her way home from the Dunkin Donuts where she works when she noticed the man was following her and acting erratically.

She changed train cars at the 138th Street and Brook Haven station, and the man followed her, jumping on top of her and slashing her in the head and the arm.

A good Samaritan saw what was going on and followed Begum to the next car, running to her aid after the attack.

"The gentleman who did this was in his mid 20s to maybe his later 20s, no reason for doing it, the girl was a very nice young girl, and he just took off running out of the train before anybody knew what happened," Nicholas Altobelli said. "So we did our best to get her back until the paramedics came. She was completely crying. She was in hysterics. She was starting to go in shock from blood loss. There was blood everywhere, all over the car. It was really, really bad, you know like nine out of 10."

Another witnesses took off his shirt and helped wrap it around the victim's head. He said he heard the screaming from two to three cars away, and when he came upon Begum, she was in major distress.

He said his instinct was to take his shirt off and wrap her injuries because they were so deep and bleeding badly. He said he spotted the attacker briefly but that the man ran off as he was tending to the victim.

Begum has worked at the Dunkin Donuts for six months and moved to the United States from Bangladesh one year ago. She said she didn't have any problems before Wednesday night's ride home.

She was taken to Lincoln Hospital for treatment of her injuries and released to recover at home.

"No one should have to go through that or endure that at all," another witness said. "That's someone's daughter or someone's mother or someone's child. I really hope they catch the guy for doing that to her because it's so messed up. It's so wrong."

Police confirmed the attack was random and that there was no exchange between the victim and the assailant.