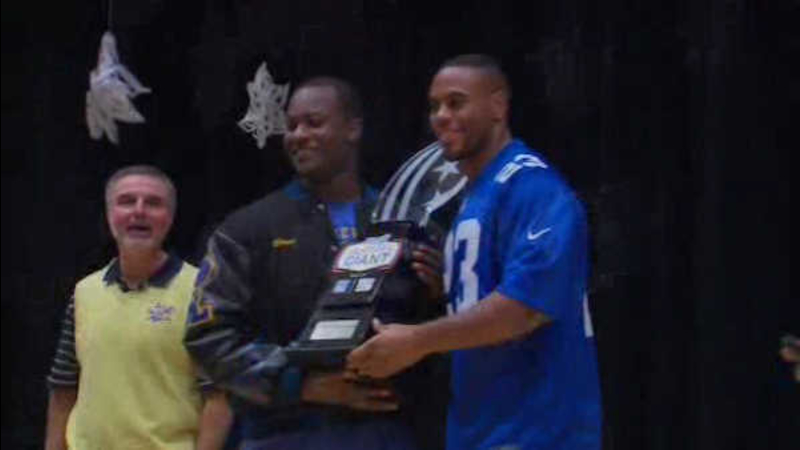 ROOSEVELT, Long Island (WABC) -- It was quite an honor on Long Island Tuesday for a high school football player.

He was recognized for his work ethic and passion, an honor so big that one of the New York Giants came home from their big win in Miami Monday night and went to the school to be a part of the fun.

Meeting Giants running back Rashad Jennings and on top of that, winning the Heart of a Giant Award.

It's given to a high school football player in the Tri-State who exemplifies hard work, dedication and inspiring character.

"This is a role model right here that showcases what it looks like as a young man to become something special," said Jennings.

"I'm so grateful to be able to say that I have the heart of a Giant," Chukwuma said.

And that he does.

In November Chukwuma didn't play in the Nassau County All Star Football game because he had another obligation -- volunteering at his church.

Right now they're collecting toys for kids with cerebral palsy.

"The program is called Smiles for CLC and we're going to be extending it throughout the year," Chukwuma said.

He's been bringing back alumni to speak with seniors about life after high school.

He's also created a mentoring program which brings the high school kids into speak with students in the middle and elementary schools.

"He's just an incredible example for the young people on our team and of course in the school community itself," said his coach, Joe Vito.

As an added perk Chukwuma will be recognized on the field when the Giants play the Panthers this Sunday at Met Life Stadium.

The Heart of a Giant award is sponsored by USA Football in partnership with the Hospital for Special Surgery and the New York Giants. For winning the award, the football team at Roosevelt High School will receive a $5,000 equipment grant.