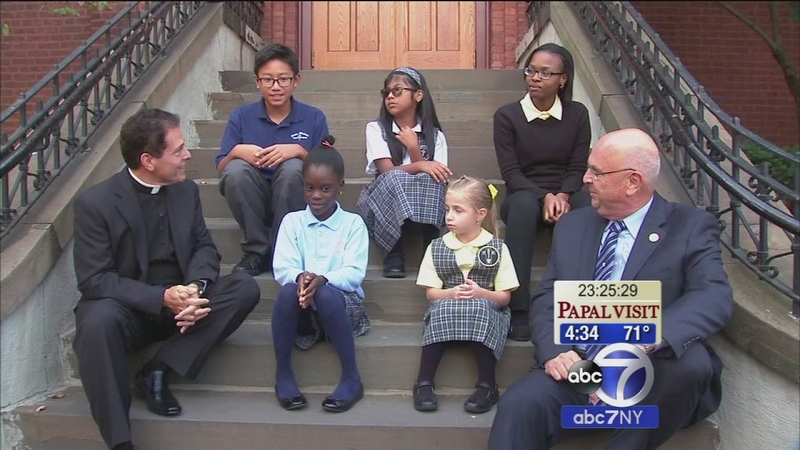 WINDSOR TERRACE (WABC) -- Pope Francis kicks off the New York City leg of his whirlwind east coast visit later this week, and one group of youngsters are the recipients of a special honor: Greeting the pontiff when he arrives in the Big Apple.

Omodele Ojo, of Windsor Terrace, admits she might be a bit star struck when she meets him.

"I'm nervous because I'm going to the airport to see the pope, and I don't know what he's going to feel like or what he is going to say," she said.

The fifth grader is one five Catholic school students chosen by the Diocese of Brooklyn to greet the pope when he arrives at John F. Kennedy International Airport on Thursday.

The fortunate five will present the pontiff with a yet-to-be-finished spiritual bouquet filled with a list of good works and prayers offered by students at the 86 Catholic schools across Brooklyn and Queens. And that's not all.

"We are going to give him a gift, which is the murals in Our Cathedral of our Lady, one of which is the patroness of Argentina," Diocese of Brooklyn Bishop Nicholas DiMarzio said. "So we will give him that as a remembrance that he was here in the diocese."

The diocese notified the students about the special honor just last week, and while the kids were overjoyed, the reaction of the parents is indescribable.

"At first I thought it was a joke, not a funny one," mom Maria Heyer said. "But again, one which I never ever would have imagined."