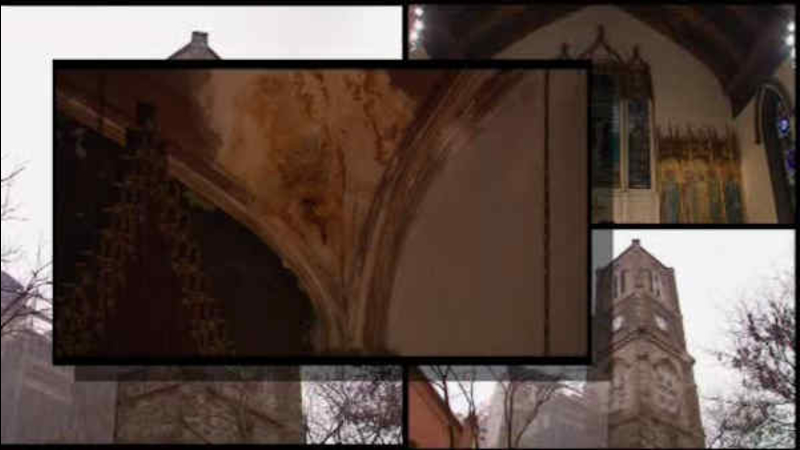 CHELSEA, Manhattan (WABC) -- A church in Chelsea is hoping the spirit of Christmas will inspire people to open their hearts and their wallets to fix a building in desperate need of millions of dollars in repairs.

St. Peter's on West 20th street is one of the oldest Gothic revival churches in New York and is also famous for its ties to one of the most well-known poems in the world.

It has been around since the 1830s, and so has its roof, which should have been replaced decades ago. The damage from the disrepair can be seen everywhere and often even heard.

"(When it rains), it's not seeping, it's rushing," Rev. Stephen Harding said.

The church owes its existence to Clement Clarke more -- author of "A Visit from St. Nicholas," or as the world now knows it, "'Twas the Night Before Christmas" -- who sold the land from his family's Chelsea estate to fledgling parish for $1.

Rev. Harding realized that if the physical structure of the church kept crumbling, St Peter's good works in the neighborhood would fall apart too. That's when he challenged the congregation, community and himself to raise $15 million to restore the 179-year-old church.

"We want to be a force for good in our own neighborhood," he said.

The seemingly-impossible fund-raising challenge got a huge boost recently when a wealthy Colorado businessman who got married in the church 30 years ago donated $1.5 million, which allowed work to begin on replacing the original tin roof.

"This church was very active in helping when AIDS crisis broke out in the 1980s, and continue to serve now," parishioner Melissa Morgenweck said. "I just think we as New Yorkers, it's our responsibility to take care of these buildings because it's our history."

Rev. Harding knows the fund-drive has millions more to raise, and the odds are great, but he believes the church that has been around since Chelsea was an apple orchard will be restored to serve for another 179 years.

"There's something about this building that makes me think we can raise $13 more million," he said.