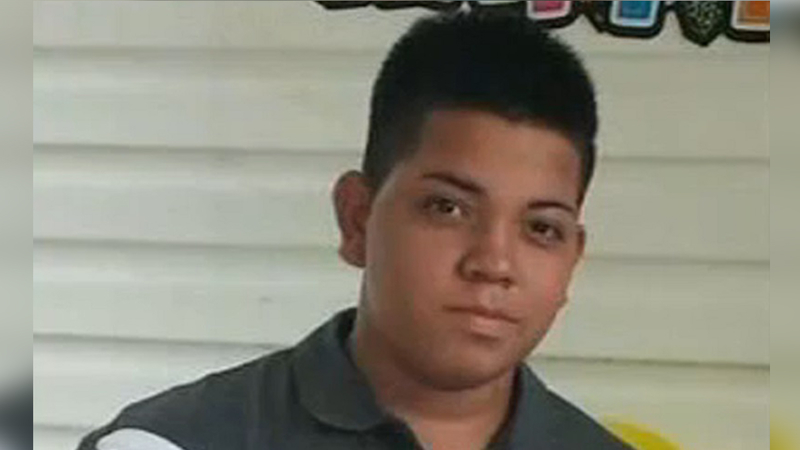 ROOSEVELT, Long Island (WABC) -- There are new details a gruesome discovery on Long Island. Police say the remains they found in the woods last week belong to a missing teen.

However, this murder mystery is just one of a number of heartbreaking cases like it in Suffolk County - now fears are mounting.

16-year-old Angel Soler was last seen leaving his home in Freeport back on July 21st, but hadn't been seen since. His remains were found buried just off the Southern State Parkway along the Roosevelt-Baldwin border, in what police are calling a grave-site.

Derick Waller has the latest on the remains found in Nassau County.

Investigators aren't saying how Soler died, or specifically whether he died at the hands of MS-13. The notorious street gang is responsible for 17 murders.

Lillian Pineda is convinced that her son has suffered the same fate. What worries Pineda is that Soler was good friends with her son, Kerin, and attended the same school in Freeport.

She told Eyewitness News that her son received a Facebook message from a girl arranging a meeting in a wooded area. Pineda now believes that the message was written by a gang member posing as a girl.

"I'm afraid he was murdered, too, just like Angel," she says.

Pineda said her son was confronted by gang members about the sneakers he was wearing shortly before he disappeared in May 2016. She is urging detectives to do more to find her son, and is expected to speak with investigators.
Report a correction or typo
Related topics:
rooseveltnassau countygang violencehomicide investigationhomicidemissing teenagermissing person
Copyright © 2021 WABC-TV. All Rights Reserved.
TOP STORIES
FBI, police search Brian Laundrie's family home in Petito case
911 caller claims he saw Brian Laundrie 'slapping' Gabby Petito
Woman tells GMA she picked up Laundrie as hitchhiker in Wyoming
Gabby Petito disappearance timeline: What we know so far
'It makes me mad': Man speaks out after he was beaten, robbed in NYC
Distraught man jumps from building, lands on victim, killing them both
3 charged in Carmine's hostess assault claim racial discrimination
Show More
White House looking into footage of Border Patrol agents on horseback
COVID Update: US death toll eclipses 1918 flu pandemic estimates
AccuWeather: Getting cloudy
TX doctor who defied state's new abortion ban is sued
Exclusive: Man punched and robbed while collecting cans speaks out
More TOP STORIES News