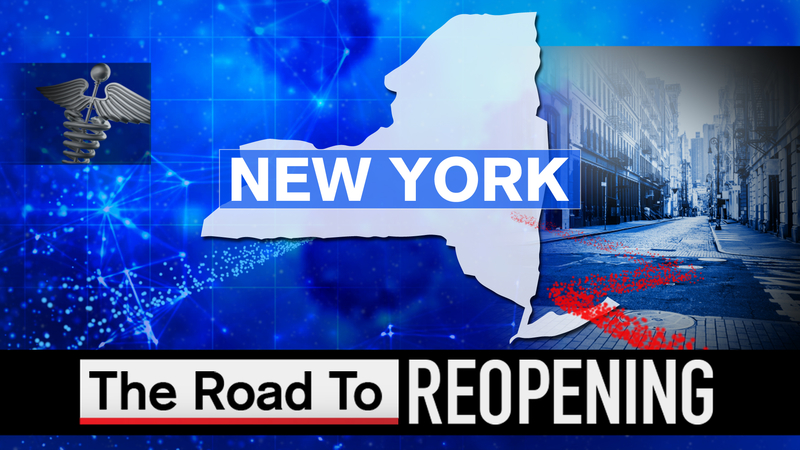 Visitors are still not allowed in nursing homes.

NEW YORK STATE
New York state has reached the lowest number of hospitalizations and deaths on the three-day average since this pandemic started, as more of the region opens further.

Five regions on Monday entered Phase 3, which has now been modified to allow gatherings of up to 25 people. Western New York entered Phase 3 on Tuesday, with the Capital Region slated for Wednesday. Long Island and the Mid-Hudson region remain in Phase 2, while New York City remains in Phase 1.

The coronavirus transmission rate on Monday was at 1.2% for New York City, 1.0% on Long Island, and 1.0% in the Hudson Valley.

The state also released the results of its antibody tests. It has taken 12,000 samples with most regions reporting some degree of increase, although Western New York was on the decline. From May 1 to June 13 statewide, the amount of people testing positive for antibodies has gone up a point from 12.3% to 13.4%.

NEW YORK CITY
Mayor Bill de Blasio said that the Testing and Tracing Corps in New York City is expected to monitor some 250,000 people if the percentage of those testing positive doesn't change this summer. They will use $4 million to distribute to community organizations to aid in their efforts.

City residents can call 844-NYC-4NYC if they need a test or have tested positive and need assistance. The city remained well below the required thresholds for hospitalizations, ICU patients, and percentage of people testing positive.

NEW JERSEY
New Jersey Governor Phil Murphy said that there was overwhelming compliance from the public as the state entered Phase 2 on Monday. The governor said that he had dinner with his family outdoors and took a walk on the boardwalk. He noted that he'd like to see more people wearing the masks on the boardwalk.
EMBED More News Videos

Anthony Johnson takes a look at restaurants in New Jersey on day two of the state's Phase 2 reopening.

The state also released the guidelines for self-care businesses like hair and nail salons to reopen next Monday.

CONNECTICUT
Connecticut enters Phase 2 of reopening on Wednesday. That means the opening of hotels and indoor recreation, including movie theaters, nail salons and gyms.

US OPEN
The U.S. Open will be held in Queens, without fans, from August 31 to September 13. The USTA will take extraordinary precautions to protect players and staff, including robust testing, additional cleaning, extra locker room space, and dedicated housing & transportation.

RECOMMENDED VIEWING
If you are still waiting on your economic impact money, you're not alone. The so-called "stimulus money" being sent out in checks, direct deposit and recently via debit cards is still being distributed. But if you got a letter confirming your money was sent, but never received it, you need to take action.

Nina Pineda has the tips to follow if you still haven't received your stimulus check.