Residents displaced after partial building collapse in the Bronx 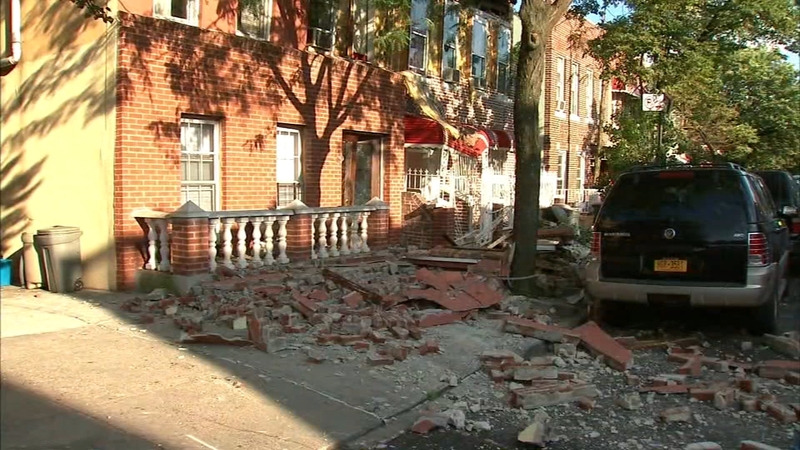 SOUNDVIEW, Bronx (WABC) -- Some Bronx residents have been displaced from their apartments following a partial building collapse Thursday afternoon.

It happened shortly before 5 p.m. at a two-story residential building on Fteley Avenue in the Soundview section.

Inspectors from the Department of Buildlings determined that a 20 foot by 8 foot section of brick veneer fell from the second story of the building, raining bricks onto the sidewalk.

"Cooking my dinner, my cell phone rung and in the midst of that it started shaking and heard a rumble and it just said boom, like so loud," said tenant Maimuunah Abdullah.

She grabbed her son Dereck and tried to get out the front of her apartment building, only to be trapped by the cascading bricks. "When we came out through we were stuck in the gate," she said. A neighbor freed them.

Fire officials believe the parapet and the stucco and brick facade at 1126 Fteley Avenue first broke away on the second floor. That then pulled the parapet and second-floor bricks from 1124.

Harriet Lawson was sitting behind her windows. "That sounded like a building fell," she said. "When I looked out the windows it was still falling and I said I got to get the hell out of here."

Harriet's son Khalil, who also lives there, rushed from his job to make sure his mother was able to get out safe.

"It's unfortunate that this happened at a time like this but pray to God that everybody was good and I'm glad they were," said Khalil.

Fire officials were assessing what happened. "It almost looks like old age," said FDNY Battalion Chief Christopher Dougherty. "The occupant of 1126 started some repair work. It looked like the age of the building."

Buildings Department inspectors were searching for a cause and trying to determine if the building is safe.

But for the night residents in both buildings are not allowed to stay and are being helped by the Red Cross.

Fteley Avenue was shut down between Watson and Gleason Avenues due to the collapse.